Lodève (Occitan: Lodeva) is a commune in the Hérault département in the Occitanie region in southern France. It is a subprefecture of the department and also the capital of the arrondissement of the same name.

Lodève started as the capital of a Celtic tribe before becoming the Roman city Luteva (also known as Forum Neronis). It was a centre for textile production under Louis XV and was home to one of only two royal factories for tapestry, the other being the one in Paris.

Lodève is in the north of the Hérault department where the plains rise up to the Larzac plateau. It is a the narrow valley of the Lergue river, a tributary of the Hérault river.

The climate of Lodève, in the Köppen climate classification, is Csb - Mediterranean climate with template summers.

The inhabitants of Lodève are known, in French, as Lodévois (women: Lodévoises).

Evolution of the population in Lodève 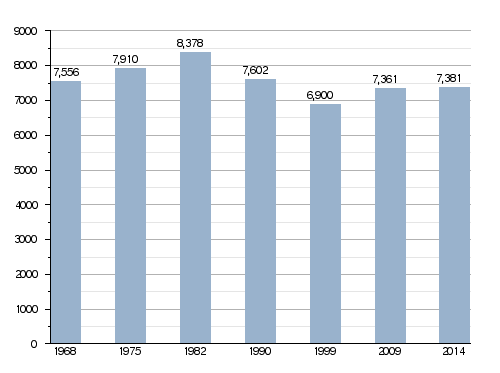 Lodève is a subprefecture of the Hérault department, the capital of the arrondissement of Lodève and the administrative centre (French: chef-lieu) of the canton of Lodève.

Lodève is twinned with:

All content from Kiddle encyclopedia articles (including the article images and facts) can be freely used under Attribution-ShareAlike license, unless stated otherwise. Cite this article:
Lodève Facts for Kids. Kiddle Encyclopedia.