Albi (Occitan: Albi) is a commune in southern France. It is the prefecture of the Tarn department, in the Occitanie region. It is on the side of the Tarn river, about 85 km (53 mi) to the northeast of Toulouse.

It is the seat of the Archbishop of Albi. The cathedral and the part of the city around it (the Episcopal City) was made a World Heritage Sites in 2010. 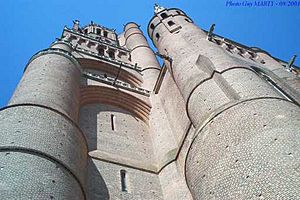 Close-up of the cathedral's bell tower

The first human settlement in Albi was in the Bronze Age (3000-600 BC). After the Roman conquest of Gaul in 51 BC, the town became Civitas Albigensium, the city of the Albigeois.

The Cathars had their main centre at Albi and so they were known also as Albigens after the city. The Cathar movement was a branch of Christianity which was persecuted in the Middle Ages. Because of this, the city was almost completely destroyed in a crusade between 1209 and 1229. Since 1678, the city is the seat of an archbishop. Since 1790, it is the capital city of the Tarn department.

Albi is in southern France, in the centre of the Tarn department. The Tarn flows through the city and splits it in two; the historical city is on the left side of the river. Several small rivers, tributaries of the Tarn, flows also through the city.

The commune is at 85 km (53 mi) northeast of Toulouse and the closest cities are Castres, Toulouse, Mazamet, Graulhet, Lavaur, Gaillac, Montauban, Rodez et Carmaux. It is surrounded by the communes Lescure-d'Albigeois to the north; Saint-Juéry to the northeast; Cunac and Cambon to the east; Fréjairolles to the southeast; Puygouzon to the south; Le Sequestre, Carlus and Saliès to the southwest; Terssac, Marssac-sur-Tarn, Florentin, Rouffiac, Cagnac-les-Mines, Castelnau-de-Lévis.

The inhabitants of Albi are known, in French, as Albigeois (women: Albigeoises).

Evolution of the population in Albi

Albi is the prefecture of the Tarn department since 1797. It is also the capital of four Cantons:

There is the St. Cecile´s cathedral worth seeing. It is built like a fortress, in a gothic style. The cathedral is built in a very special style. Inside, there are frescoes from the Renaissance, worth a visit.

The cathedral has walls which are up to 6 m (20 ft) thick. This makes it the biggest brick building in the world.

There is a museum dedicated to Henri de Toulouse-Lautrec in the city. De Touluose-Lautrec was born in the city. There are also paintings of other people in the museum.

Albi is twinned with:

Overview of Albi and the Tarn river during the sunset.

All content from Kiddle encyclopedia articles (including the article images and facts) can be freely used under Attribution-ShareAlike license, unless stated otherwise. Cite this article:
Albi Facts for Kids. Kiddle Encyclopedia.