Christopher Columbus, looking for a way to the Pacific Ocean during its fourth voyage to the Americas, visited this region in 1502 and named the island known now as Colón Island as "Isla del Drago" (the Dragon's Island).

The limits of the districts were changed in 1997 when the Ngäbe-Buglé comarca was created.

The Bocas del Toro province borders the Caribbean Sea to the north, Limón Province of Costa Rica to the west, Chiriquí Province to the south, and Ngäbe-Buglé Comarca to the east. The Sixaola river forms part of the border with Costa Rica.

Bocas del Toro province has an area of 4,657.2 km2 (1,798.15 sq mi). The province includes the Bocas del Toro Archipelago, a group of islands in the Caribbean Sea; the main islands of the archipelago are:

The people of the province are known as Bocatoreños (women:Bocatoreñas).

Evolution of the population in Bocas del Toro province 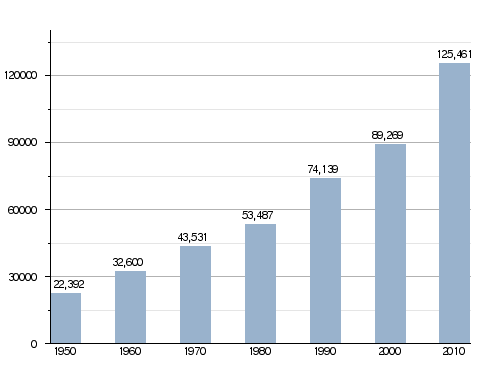 The Bocas del Toro province is divided in four districts, which are divided into 30 corregimientos. The new district of Almirante was created on 8 June 2015 with territory of the Changuinola district.

The main economic activity in the mainland of the province is farming, with plantain as the main commercial crop. In the islands, the main activities are fishing and tourism.

All content from Kiddle encyclopedia articles (including the article images and facts) can be freely used under Attribution-ShareAlike license, unless stated otherwise. Cite this article:
Bocas del Toro Province Facts for Kids. Kiddle Encyclopedia.