Limón is a province of Costa Rica. It is in the eastern part of the country along the Caribbean Sea. The provincial capital is the city of Puerto Limón.

The Limón province borders the provinces of Heredia, Cartago and San José to the west, and Puntarenas province to the southwest. Nicaragua is to the north of the province, Panama to the south and the Caribbean Sea to the east.

Most of territory of the province is flat land of low altitude but in the southwest is the Cordillera de Talamanca ("Talamaca mountain range") with the highest mountain of the country, the Cerro Chirripó, with an altitude of 3,819 m (12,530 ft) above sea level.

The main river of the province is the Reventazón, the second longest river of the country after the Térraba; it is 145 m (476 ft) long.

Unlike the rest of Costa Rica, Limón has no dry-wet seasons. It rains all the year. The driest months are in September and October. The Köppen climate classification type for the climate at Puerto Limón is a "Tropical Rainforest Climate" and of the subtype "Af".

The people of the province are known as Limonenses, both men and women.

Evolution of the population in Limón 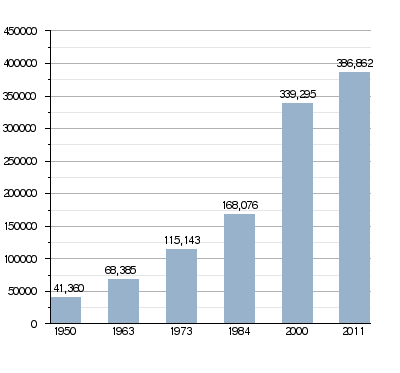 The Limón province is divided in 6 cantons, which are divided into 29 Districts.

The main economic activity in the province is farming, with plantations of banana, pineapple, cacao, pejibaye and other tropical crops.

In the province is the port of Moín, the most important in the country.

All content from Kiddle encyclopedia articles (including the article images and facts) can be freely used under Attribution-ShareAlike license, unless stated otherwise. Cite this article:
Limón Province Facts for Kids. Kiddle Encyclopedia.