The plantain is a crop from the genus Musa. Its fruits are edible, and are generally used for cooking. This is different from the soft and sweet banana (which is often called dessert banana). Dessert bananas are more common to import in countries in the European Union or the United States.

The way certain species are called often show how they are used: cooking plantain, banana plantain, beer banana, bocadillo plantain (the little one), etc. All members of the genus Musa are indigenous to the tropical region of Southeast Asia, including the Malay Archipelago and northern Australia.

Use of parts other than the fruit 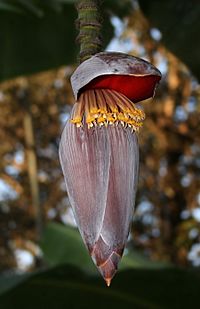 Each pseudostem of a plantain plant will flower only once. All the flowers grow at the end of its shoot in a large bunch made of multiple hands with individual fingers (the fruits). Only the first few hands will become fruits. In Vietnam the young male flower, at the end of the bunch, is used to make salad. In Laos, the plantain flower is often eaten raw; it is added to a special kind of soup. Thoran is made in Kerala with the end of the bunch (called "Koompu" in Malayalam and Vazhaipoo in Tamil). It is said to be very healthy. You can fry it or boil it

Plantain leaves are used like plates in several dishes, including Hallaca from Venezuela, or south Indian Thali. In southern India, meals are traditionally served on a plantain leaf. The position of the different food items on the leaf is important, also for Hindu rituals.

The leaves are usually easy to find in Venezuela. They are sold at grocery stores, and they can be bought on the open-air markets there . Leaves can be very big, over 2 m (7 ft) in length. They are also used to stimulate appetite, as they have a distinctive smell when hot food is placed on them.

In Nicaragua, leaves are used to wrap different kinds of food, such as Nacatamales,Vigoron and Vaho. In Peru they are often used to wrap the famous Tamale (Tamales). In Honduras, Costa Rica, Panama, and Colombia, these are usually used to wrap tamales before and while cooking, and they can be used to wrap any kind of seasoned meat while cooking to keep the flavor in. The plantain is the main food source of the Dominican Republic, and is used just as much as, if not more than, rice. Mangu and Sancocho are two dishes for which the plantain is very important.

The leaves are also dried and used to wrap corn dough before it is boiled to make Fanti kenkey, a fine Ghanaian dish eaten with ground pepper, onions, tomatoes and fish.

The plantain will only fruit once. After harvesting the fruit, the plantain plant can be cut and the layers peeled (like an onion) to get a cylinder shaped soft shoot. This can be chopped and first steamed, then fried with masala powder, to make an excellent dish. This dish is called Posola in Assamese and a distinct part of Assamese cuisine.

All content from Kiddle encyclopedia articles (including the article images and facts) can be freely used under Attribution-ShareAlike license, unless stated otherwise. Cite this article:
Plantain Facts for Kids. Kiddle Encyclopedia.