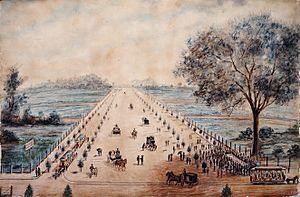 Paulista Avenue (Avenida Paulista in Portuguese, Paulista being the demonym for those born in São Paulo state) is one of the most important avenues in São Paulo, Brazil. It stretches 2.8 kilometres (1.7 mi) and runs northwest to southeast. Its northwest point is Praça Marechal Cordeiro de Farias (pt) at its intersection with Rua da Consolação (pt) and its southeast point is Praça Oswaldo Cruz (pt) at its intersection with Treze de Maio, Bernardino de Campos, Desembargador Eliseu Guilherme, and Dr. Rafael de Barros avenues. Major crossroads on the street are Rua Augusta, Rua Haddock Lobo (pt) and Avenida Brigadeiro Luis Antonio (pt). Parallel to it are Cincinato Braga, Joaquim Eugenio de Lima on the Bela Vista/Paraíso side and Alameda Santos and Coronel Oscar Freire on the Jardins side. Paulista Avenue crosses sections of the neighborhoods of Paraíso, Bela Vista (pt), Jardim Paulista, Cerqueira César (pt) and Jardim América (pt), ending in Higienópolis.

The headquarters of a large number of financial and cultural institutions are located on Paulista Avenue. As a symbol of the center of economic and political power of São Paulo it has been the focal point of numerous political protests beginning in 1929 and continuing into the 21st century. It is also home to an extensive shopping area and to South America's most comprehensive fine-art museum, MASP. Being one of the highest points in São Paulo, it is clustered with radio and TV stations antennae, most notably that of Rede Gazeta. Paulista Avenue is a major hub of the subway and bus lines of the city.

All content from Kiddle encyclopedia articles (including the article images and facts) can be freely used under Attribution-ShareAlike license, unless stated otherwise. Cite this article:
Paulista Avenue Facts for Kids. Kiddle Encyclopedia.