Ibirapuera Park (Portuguese: Parque Ibirapuera) is a major urban park in São Paulo, Brazil. It has a large area for leisure, jogging and walking, as well a vivid cultural scene with museums and a music hall. Its importance to São Paulo is often comparable to that of Central Park to New York City, Golden Gate Park to San Francisco, or Ueno Park to Tokyo. Ibirapuera is one of Latin America's largest city parks, together with Chapultepec Park in Mexico City and Simón Bolívar Park in Bogota.

The park is located in the subprefecture of Vila Mariana, São Paulo. The area was a floodplain.

The name of the park means "rotted tree" in Tupi-Guarani, and it is named after an indigenous village that was in the area. In 1906 control of the area was transferred to the municipality. At the time the area was very swampy, and trees were planted in the area in the 1920s to counteract this.

Ibirapuera was the first metropolitan park in São Paulo, and was designed along the lines of other great parks in large cities, such as Central Park. 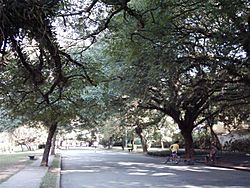 Inaugurated on 21 August 1954 for the 400th anniversary of the city, with buildings designed by famous architect Oscar Niemeyer and landscape by agronomist Otávio Agusto de Teixeira Mendes, Ibirapuera Park covers an area of 158 hectares (1.58 km2) Admission has been free since 1954, and it is open 5am until midnight.

Today, Ibirapuera Park was voted one of the top ten urban parks in the world by the Guardian. Ibirapuera Park is the most visited park in São Paulo, attracting more than 130,000 visitors during high season, and hosting popular events such as São Paulo Fashion Week, and several congresses and trade shows. 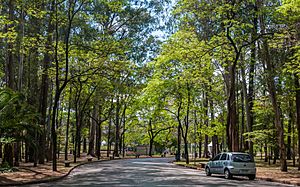 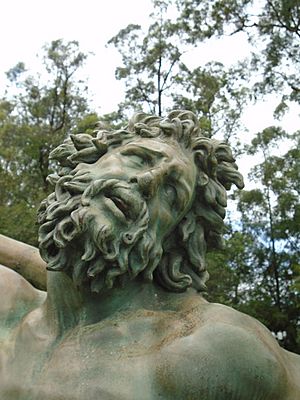 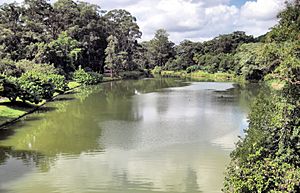 The park complex contains several buildings, most of them designed by Oscar Niemeyer. They include:

All content from Kiddle encyclopedia articles (including the article images and facts) can be freely used under Attribution-ShareAlike license, unless stated otherwise. Cite this article:
Ibirapuera Park Facts for Kids. Kiddle Encyclopedia.