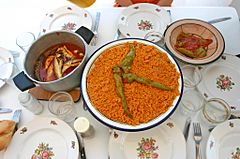 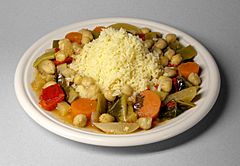 Couscous with vegetables and chickpeas 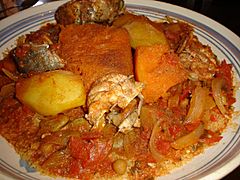 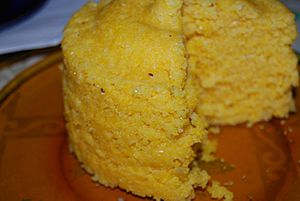 Brazilian cake made with couscous

Couscous is a kind of food, originally from the Berbers of North Africa. It has two related meanings:

Couscous is not cooked, but rather steamed over hot water. Couscous is served as a side-dish, or as a main dish. The stew must have plenty of liquid, or else a separate bowl of sauce must be provided. This is because the couscous grain is rather dry, and absorbs plenty of liquid. It is a definite fault to serve a couscous dish with too little liquid.

It is the official food of Morocco. The dish is extremely popular in other areas like southern France, Sicilia, Brazil and the Middle East.

In Brazil, couscous is a typical dish from the Northeast of the country, which is part of the three meals of the day. Being commonly prepared with starch, wheat flour, corn, rice or cassava. In Southeast, it is consumed with butter, eggs or meat. In North, it is more common for couscous to be eaten for breakfast, made with coconut milk and accompanied by tapioca. In general, all types of side dishes are accepted in the country. Other examples of foods eaten with couscous are fish, shrimp, and chicken.

The couscous that is sold in most Western supermarkets has been pre-steamed and dried; the package directions are usually to add 1.5 measures of boiling water or stock and butter to each measure of couscous and to cover tightly for five minutes. The couscous swells and within a few minutes it is ready to fluff with a fork and serve. Pre-steamed couscous takes less time to prepare than regular couscous.

All content from Kiddle encyclopedia articles (including the article images and facts) can be freely used under Attribution-ShareAlike license, unless stated otherwise. Cite this article:
Couscous Facts for Kids. Kiddle Encyclopedia.