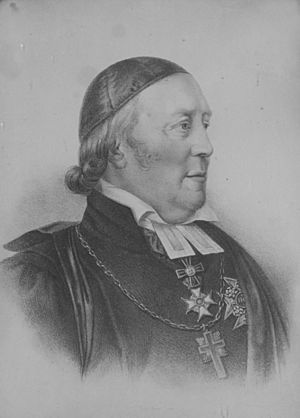 Carl von Rosenstein, born Carl Aurivillius on 13 May 1766 in Uppsala, Sweden; dead 2 December 1836 at Brunna Mansion, Sweden was a Swedish Lutheran clergyman. He was the Church of Sweden Archbishop of Uppsala from 1819 to 1836. Before that he served as the Bishop of Linköping from 1809 to 1819. His family tree included scientists like Sven Magnus Aurivillius and Per Olof Christopher Aurivillius. The "von Rosenstein" name was his mother's family name and came through an adoption. His grandfather was Nils Rosén von Rosenstein, Uppsala University professor of medicine.

All content from Kiddle encyclopedia articles (including the article images and facts) can be freely used under Attribution-ShareAlike license, unless stated otherwise. Cite this article:
Carl von Rosenstein Facts for Kids. Kiddle Encyclopedia.