Ipomoea indica is a species of flowering plant in the family Convolvulaceae, known by several common names, including blue morning glory, oceanblue morning glory, koali awa, and blue dawn flower. It bears heart-shaped or 3-lobed leaves and purple or blue funnel-shaped flowers 6–8 cm (2–3 in) in diameter, from spring to autumn. The flowers produced by the plant are hermaphroditic. This plant has gained the Royal Horticultural Society's Award of Garden Merit.

The plant is grown as an ornamental for its pretty flowers, but it is invasive in many regions of the world and is specifically listed on New Zealand's Biosecurity Act 1993.

The Latin specific epithet indica means from India, or the East Indies or China. In this case, the name likely refers to the West Indies, as I. indica is native to the New World. 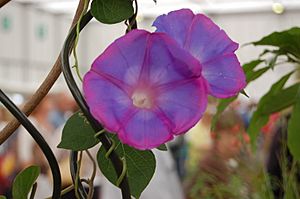 Ipomoea indica is a vigorous, long-lived, tender perennial vine native to tropical, subtropical and warm temperate habitats throughout the world. They can most commonly be found in disturbed forests, forest edges, secondary woodland, suburban gullies, and along roadsides and waterways. The plant climbs well over other plants, walls and slopes as growing on the bottom. Its climbing habit allows it to compete with trees and shrubs successfully. It is a twisting, occasionally lying, herbaceous plant which is more or less densely hairy on the axial parts with backward-looking trichomes. The stems can grow 3 to 6 cm long and sometimes have roots at the nodes.

The leaves are petiolate with 2 to 18 cm long petioles. The leaf blade is egg-shaped or round, 5 to 15 cm long and 3.5 to 14 cm wide. The underside is densely hairy with short, soft trichomes, the top is more or less sparsely hairy. The base is heart-shaped, the leaf margin is entire or three-lobed, the tip is pointed or sharply pointed.

The crown is funnel-shaped, 5 to 8 cm long, glabrous, bright blue or bluish purple, with age they become reddish purple or red. The centre of the crown is a little paler.

I. indica is a long-lived plant that can live up to 25 years.

The inflorescences are dense, umbelliform cymes from a few flowers. The inflorescence stems are 4 to 20 cm long. The bracts are linear or sometimes lanceolate. The flower stems are 2 to 5 (rarely up to 8 mm) long. The sepals are almost uniform, 1.4 to 2.2 cm long and slowly sharpened linearly. They are hairless to close-fitting, the outer three sepals are lanceolate to broadly lanceolate, and the inner two are narrowly lanceolate. The stamens and the stamp do not protrude beyond the crown. The ovary is hairless. The scar is three-lobed.

The fruits are more or less spherical capsules with a diameter of 1 to 1.3 cm. The seeds are about 5 mm in size and are dispersed via rain, wind, human activity, gravity, and waterways. 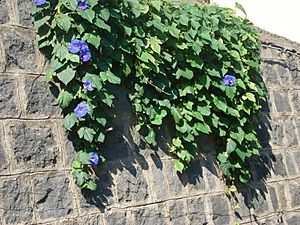 Growing down a wall

Its exact native distribution is unclear due to it being widely cultivated throughout the tropics of Eurasia, Africa and America, but it is currently thought by most authorities to be native to the Neotropics, from Florida in the United States south to Mexico, Central America, and the Caribbean and south to South America. It is also considered native to several Pacific islands, including Palau, the Hawaiian Archipelago (where its native Hawaiian name is Koali ‘awa), French Polynesia, and Micronesia. However, other authorities consider it to be an introduced and/or invasive species in the United States, Mexico, and parts of its Caribbean and Pacific range.

Ipomoea indica has become a noxious weed and invasive plant species in Australia, California, China, Ethiopia, France, Greece, Italy, Kenya, Mexico, Montenegro, New Caledonia, New Zealand, Portugal, South Africa, Tanzania, and Uganda. In New Zealand, it is classed as an unwanted organism under the Biosecurity Act 1993 and it is therefore illegal to sell, propagate and distribute the plant. It is listed on the National Pest Plant Accord for New Zealand.

When growing in optimal conditions, the plant is able to spread via seeds, stolons, and stem fragments. I. indica is capable of producing a very large amounts of seeds for dispersal. These seeds are easily germinated, giving the plant the ability to rapidly invade and colonize new land. It can grow over pre-existing trees, shrubs, and other plant species. I. indica successfully outcompetes many native plants for substrates, nutrients, sunlight and water. The stolons of blue morning glory create a thick mat over ground plants, reducing the light available for those plants. The stolons of blue morning glory are also capable of growing at a rapid pace, adding to the plant's succession. Each part can grow as a separate plant if snapped during the process of attempted removal.

The only natural enemy of I. indica is the oomycete plant Albugo ipomoeae-panduratae, which have shown instances of infecting the plant. Its lack of natural enemies is another reason I. indica is very successful and adds to its invasive abilities.

Blue morning glory is a popular species widely cultivated as an ornamental plant for its colourful flowers. It has spread throughout the tropics and subtropics of the Old World although those regions are not part of its native range. As it does not tolerate temperatures below 7 °C (45 °F), in temperate regions it is grown under glass. It likes very light and nutrient-rich soil, which should be kept evenly moist.

All content from Kiddle encyclopedia articles (including the article images and facts) can be freely used under Attribution-ShareAlike license, unless stated otherwise. Cite this article:
Ipomoea indica Facts for Kids. Kiddle Encyclopedia.