Myosotis (from the Greek: μυοσωτίς "mouse's ear", after the leaf) is a genus of flowering plants in the family Boraginaceae.

In the northern hemisphere they are commonly called forget-me-nots or scorpion grasses. The common name "forget-me-not" was calqued from the German Vergissmeinnicht, and first used in English in 1398 AD via King Henry IV. Similar names and variations are found in many languages. Myosotis alpestris is the state flower of Alaska and Dalsland Sweden. Plants of this genus are commonly confused with Chatham Islands forget-me-nots which belong to a related genus, Myosotidium.

Over five hundred species names have been recorded, but there are only 74 accepted species. The rest are either synonyms of currently accepted names or submissions awaiting resolution.

The genus is largely restricted to two discrete geographic centres: western Eurasia with about 60 confirmed species and New Zealand with around 40 confirmed species. Very small numbers of species occur elsewhere including North America, South America, and Papua New Guinea. Despite this, Myosotis species are now common throughout temperate latitudes via the planting of cultivars and introductions of alien species. Many are popular in gardens, preferring moist habitats. In areas where they are not native, they have frequently escaped to wetlands and riverbanks. Only those native to the Northern hemisphere are commonly called Forget-me-not.

It is equally possible that the genus originated in either the Northern Hemisphere or in New Zealand. One or two European species, especially the wood forget-me-not, Myosotis sylvatica have been introduced into most of the temperate regions of Europe, Asia, and the Americas. 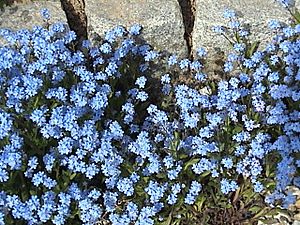 Myosotis have 5-merous actinomorphic flowers with 5 sepals and petals. Flowers are typically 1 cm diameter (or less), flat, and blue, pink, white or yellow with yellow centres, growing on scorpioid cymes. They may be annual or perennial with alternate leaves. They typically flower in spring or soon after snow-melt in alpine eco-systems. Their root systems are generally diffuse.

Their seeds are found in small, tulip-shaped pods along the stem to the flower. The pods attach to clothing when brushed against and eventually fall off, leaving the small seed within the pod to germinate elsewhere. Seeds can be collected by putting a piece of paper under the stems and shaking the seed pods and some seeds will fall out.

Myosotis scorpioides is also known as scorpion grass due to the spiraling curve of its inflorescence.

All content from Kiddle encyclopedia articles (including the article images and facts) can be freely used under Attribution-ShareAlike license, unless stated otherwise. Cite this article:
Forget-me-not Facts for Kids. Kiddle Encyclopedia.