Myosotis eximia is a species of forget-me-not native to the North Island of New Zealand. The species was described by Donald Petrie.

This species was first collected in December 1914 by Bernard Aston on the slopes of Mt Aorangi, in the Ruahine Ranges, where it formed "continuous patches several feet across, adorned by masses of lovely flowers." at an altitude of 3,900 feet (1,200 m) Donald Petrie described the species in 1915, and named it eximia, meaning "strikingly unusual".

Myosotis eximia is a extensively-branched spreading perennial, which forms clusters of tight rosettes with erect flowering stems. The leaves are sparsely covered in dense, straight hairs that lie flat against the leaf. M. eximia flowers in December and January; its flowers, which Petrie described as "large and showy, white with a yellow eye", have projecting anthers. The anthers are only 2 mm long, much shorter than their filaments.

The species is endemic to New Zealand, and has a very restricted distribution, known only from the Kaimanawa and Ruahine Ranges in the central North Island. It lives in the subalpine to alpine zone, on scree slopes and limestone bluffs. It prefers alkaline soils on limestone or calcareous sandstone. 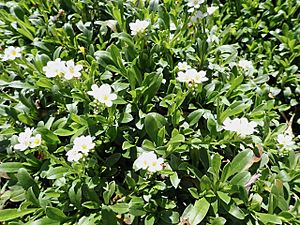 M. eximia is listed by the Department of Conservation as "At Risk – Naturally Uncommon" on the most recent New Zealand Threat Classification for plants. Its numbers are thought to be stable, with the qualifiers "DP" (Data Poor) and "RR" (Range Restricted). Because of its specialised habitat requirements its populations are small and localised, but do not seem to be under threat.

This species grows surprisingly well in gardens, preferring soil with some added lime, and is often for sale in native plant nurseries. It needs a sunny, well drained situation, and will flower heavily even in warm climates far from its natural subalpine habitat.

All content from Kiddle encyclopedia articles (including the article images and facts) can be freely used under Attribution-ShareAlike license, unless stated otherwise. Cite this article:
Myosotis eximia Facts for Kids. Kiddle Encyclopedia.