Collingdale is a borough in Delaware County, Pennsylvania, United States. The population was 8,908, at the 2020 census. 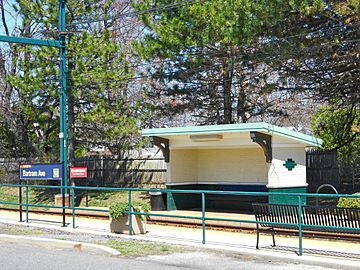 U.S. Route 13 crosses the eastern corner of the borough. MacDade Boulevard (running approximately northeast-southwest), Clifton Avenue, and Woodlawn Avenue (both northwest-southeast) are the principal streets. The SEPTA Route 102 light rail line passes through the borough, with four stops in it. The Media/Elwyn commuter rail line passes nearby to the north; the closest stations are Clifton-Aldan and Primos.

Southern rock group 38 Special used the Collingdale Police force in making the video for their song "Back Where You Belong". In the video the Collingdale Chief of Police Robert Morris began the video with an homage to the TV show "Hill Street Blues". After giving a short speech, he told the officers: "Let's be careful out there", a signature line from the TV show.. Part of the video was filmed in neighboring Philadelphia under the Walt Whitman Bridge. 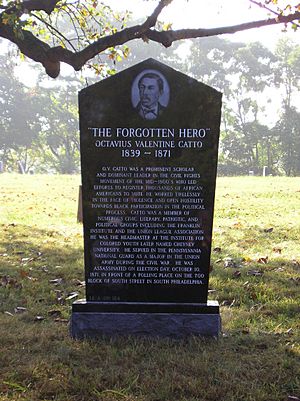 A significant portion of Collingdale's area is made up of four cemeteries, three of which are active. Eden Cemetery is an African-American cemetery, where many notable persons are buried, including singer Marian Anderson, physician Rebecca Cole, and civil rights activist Octavius Catto. It was listed on the National Register of Historic Places in 2010. Har Zion Cemetery and Mt. Lebanon Cemetery are Jewish cemeteries. The fourth, an American Civil War-era cemetery, has been maintained by a local Veterans of Foreign Wars Post.

Felton Ave. is named after W. C. Fields's maternal grandfather, a native of the town when it was part of Darby Township.

Students are in the Southeast Delco School District. Most K-8 school residents in Collingdale are zoned to the Harris School, while a few are zoned to Darby Township School. All residents of the school district are zoned to Academy Park High School.

The Roman Catholic Archdiocese of Philadelphia formerly operated St. Joseph School in Collingdale, which closed in 2010. There were 140 prospective children for the 2010-2011 school year that did not happen when the archdiocese wanted 200. Schools taking former St. Joseph's children were Our Lady of Fatima in Secane, St. Eugene in Primos, and St. Gabriel in Norwood.

All content from Kiddle encyclopedia articles (including the article images and facts) can be freely used under Attribution-ShareAlike license, unless stated otherwise. Cite this article:
Collingdale, Pennsylvania Facts for Kids. Kiddle Encyclopedia.