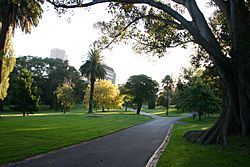 Late afternoon sunlight on the Gardens 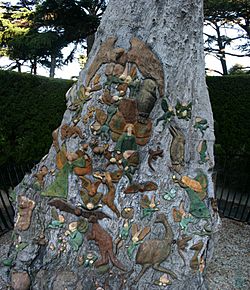 Fairies Tree in the Fitzroy Gardens.

The Fitzroy Gardens are 26 hectares (64 acres) located on the southeastern edge of the Melbourne Central Business District in East Melbourne, Victoria, Australia. The gardens are bounded by Clarendon Street, Albert Street, Lansdowne Street, and Wellington Parade with the Treasury Gardens across Lansdowne street to the west.

The gardens are one of the major Victorian era landscaped gardens in Australia and add to Melbourne's claim to being the garden city of Australia. Set within the gardens are an ornamental lake, a scarred tree, a visitor information centre and cafe, a conservatory, Cooks' Cottage (a house where the parents of James Cook lived, brought from England in the 1930s), tree-lined avenues, a model Tudor village, a band pavilion, a rotunda, the "Fairies' Tree", fountains and sculptures. 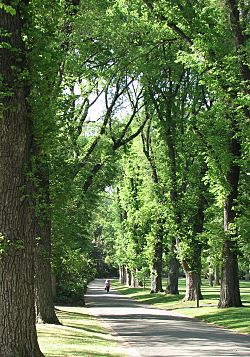 An avenue of English Elms in the Gardens.

The most notable feature of the Gardens is the trees that line many of the pathways.

The land was originally swampy with a creek draining into the Yarra River. The gardens were initially designed by Clement Hodgkinson and planted by park gardener, James Sinclair, as a dense woodland with meandering avenues. The creek was landscaped with ferns and 130 willows, but that did not stop it smelling foul from the sewage from the houses of East Melbourne. The creek was used for irrigation of the western side of the gardens for fifty years. In the early 1900s the creek water substantially improved when sewerage mains were installed to the residences of East Melbourne.

In the early years quick growing blue gums and wattles were planted to provide wind breaks. Elm trees were planted to create avenues along pathways, which unknowingly created a pattern in resemblance to the Union Flag.

...the chief desiderata were shade along the numerous paths therein forming important lines of traffic, and such dense and continuous masses of foliage as would tend to check the inroad of dust from the adjacent streets.

Consequently, in such reserves, strict adherence to the rules of landscape gardening, with regard to the grouping of trees, etc., had to be abandoned in favour of the formal lining of the paths with rows of umbrageous trees, and the planting in the background of dense masses of conifers, evergreen shrubs, fern trees, etc., small flowering shrubs and bedding flowers being merely introduced to mask the unsightly aspect of the grass in such reserves during summer 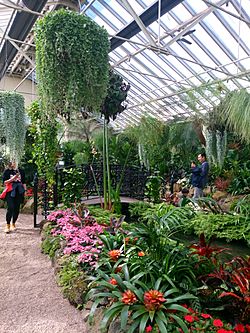 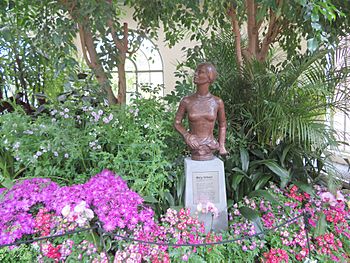 During the 1880s and 1890s many of the blue gums were removed to create more room for existing trees, as well as sweeping lawns and ornamental flowerbeds. Sub Tropical planting became a feature of the Gardens with the creation of new planting in areas like the Mound and the Grey Street Walk. Further major changes occurred in the 1930s and 1940s with the establishment of the Conservatory and the arrival of Cooks' Cottage in the Gardens. In 2014 an area previously used for depot activities was re- claimed as garden space and features a major stormwater harvesting system, a café and visitor centre which provides tourism information about Melbourne as well as specific information and services for Cooks' Cottage and Fitzroy Gardens. 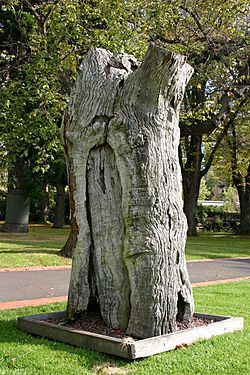 The listing on the Victorian Heritage Register states in part:

The Fitzroy Gardens are of historical, aesthetic, architectural, scientific (horticultural) and social significance to the State of Victoria.

Why is it significant? The Fitzroy Gardens are of historical significance as one of a ring of public reserves around Melbourne established in the nineteenth century to provide respite and relaxation for the city's residents. The Fitzroy Gardens have been viewed as the flagship of this group of city gardens, which includes the Flagstaff, Treasury, Carlton and Alexandra Gardens and the Kings Domain. In a statewide context, while not as intact as the Royal Botanic Gardens or the Ballarat Botanical Gardens, the Fitzroy Gardens are an important remnant of the city's nineteenth-century garden heritage. They are also a reminder of the city's relatively large investment in public gardens, a reflection of 19th century beliefs about the moral and health benefits of green spaces in often dirty, smelly and overcrowded cities.

A scarred tree in the gardens has been preserved. The plaque at the bottom of the tree reads:

The scar on this tree was created when Aboriginal people removed bark to make canoes, shields, food and water containers, string, baby carriers and other items.

Please respect this site. It is important to the Wurundjeri people as traditional custodians of the land and is part of the heritage of all Australians.

All Aboriginal cultural sites are protected by law.

The gardens are home to brushtail and ringtail possums, rainbow lorikeets, ducks and microbats (small insect eating bats). They are visited at night by grey-headed flying foxes (a large nectar and fruit eating bat) and powerful owls. The presence of Australian wildlife make the city gardens especially enjoyable for overseas visitors and locals alike. 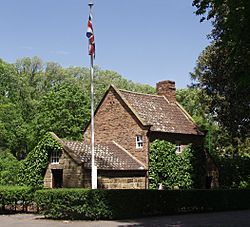 Cooks' Cottage in the Fitzroy Gardens.

All content from Kiddle encyclopedia articles (including the article images and facts) can be freely used under Attribution-ShareAlike license, unless stated otherwise. Cite this article:
Fitzroy Gardens Facts for Kids. Kiddle Encyclopedia.