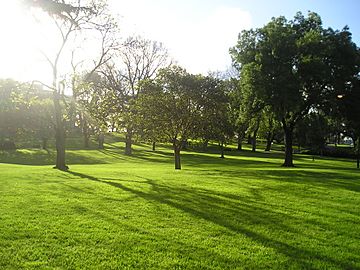 Flagstaff Gardens is the oldest park in Melbourne, Victoria, Australia, first established in 1862. Today it is one of the most visited and widely used parks in the city by residents, nearby office workers and tourists. The gardens are notable for their archaeological, horticultural, historical and social significance to the history of Melbourne.

The gardens are 7.2 hectares (18 acres) of Crown Land bounded by William, La Trobe, King and Dudley streets, managed by the City of Melbourne. On the southeast corner opposite is the entrance to Flagstaff railway station. Diagonally opposite stands the Victorian branch of the Royal Mint, established 7 August 1869. The former Royal Mint building is a well-preserved example of Victorian Gold Rush boom-period classical styled architecture. The facade features paired columns with scrolled capitals and the Royal Mint coat-of-arms.

On the northeast corner over William Street, is the Queen Victoria Market.

The park contains extensive lawns with a variety of mature trees, flowerbeds and wild animals including possums. The southern end is characterised by deciduous trees, while the northern end contains mature eucalypts. Avenues of elms shade pathways along with several large Moreton Bay Fig trees. The north corner contains a bowling lawn, rose beds, flower and shrub beds. Along William Street there are tennis courts, which also double as volleyball, handball and netball courts. Electric barbecues nearby provides a popular site for office parties in December. Scattered about the lawns and gardens are memorials and sculptures that illuminate some of the social significance of the area.

Flagstaff Gardens have been classified by the National Trust of Australia (Victoria) and is listed by the Australian Heritage Commission and the Victorian Heritage Register. At the listing ceremony by the Victorian Heritage Council in April 2004, Council Chair Chris Gallagher said "This listing ensures the much loved trees, landscaping and other individual features are conserved and protected. But it also means the whole site is recognised as an important place for gaining an insight into our historical, archaeological, aesthetic, horticultural and social heritage."

With the establishment of Melbourne in 1835, the first deaths in the colony were buried on high ground between William and King Streets, in what was colloquially called Burial Hill. The hill had panoramic views of the small colony, the Yarra River and Port Phillip.

All content from Kiddle encyclopedia articles (including the article images and facts) can be freely used under Attribution-ShareAlike license, unless stated otherwise. Cite this article:
Flagstaff Gardens Facts for Kids. Kiddle Encyclopedia.