The Arlington Street Church is a Unitarian Universalist church across from the Public Garden in Boston, Massachusetts. Because of its geographic prominence and the notable ministers who have served the congregation, the church is considered to be among the most historically important in American Unitarianism and Unitarian Universalism. Completed in 1861, it was designed by Arthur Gilman and Gridley James Fox Bryant to resemble James Gibbs' St. Martin-in-the-Fields in London. The main sanctuary space has 16 large-scale stained-glass windows installed by Tiffany Studios from 1899 to 1929.

On May 17, 2004, the Arlington Street Church was the site of the first state-sanctioned same-sex marriage in the United States. 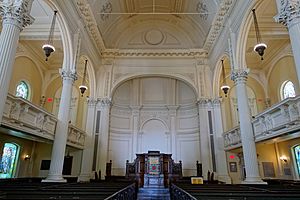 As the population of Boston grew and land became scarce, landfilled areas were created in the North End, South End, and finally the Back Bay during the 1850s. When the area around Federal Street became commercial, the congregation voted to move to newly filled land in the Back Bay neighborhood. Arlington Street Church was the first public building to be constructed there. The building was begun in 1859, and dedicated in 1861 as the American Civil War loomed. Designed by Arthur Gilman and Gridley James Fox Bryant, architects for the Old Boston City Hall, its exterior was inspired by St. Martin-in-the-Fields, London.

The building is supported by 999 wooden pilings driven into the mud of Back Bay, and brownstone ashlar for its exterior was quarried in New Jersey. The bell tower stands 190 feet (58 meters) tall and contains a set of 16 bells, each with a Biblical inscription. It is one of only four sets in the city of Boston still rung by hand. The building was listed on the National Register of Historic Places in 1973 and designated a Boston Landmark by the Boston Landmarks Commission in 1978.

Landscaping for the church was designed by Mabel Keyes Babcock. 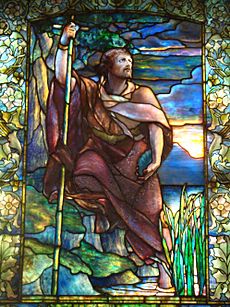 The sanctuary, with its Corinthian columns and graceful rounded arches, was modeled after the Basilica della Santissima Annunziata del Vastato in Genoa, Italy. The panels on either side of the choir loft, containing the Ten Commandments and the Lord’s Prayer, were brought from the Federal Street Church, as was Dr. William Ellery Channing’s pulpit, which stands in the Hunnewell Chapel. The box pews, made of chestnut with black walnut rails, were at one time deeded to members of the congregation. Enclosing each pew signified that they were privately owned, and also kept cold drafts from blowing in from the aisles during the winter season.

Originally, all of the sanctuary windows were glazed with clear glass. In 1898, the congregation voted to start installation of memorial stained glass windows created by the studios of Louis C. Tiffany, and commissioned a set of designs for all 20 windows. The last of 16 Tiffany windows was installed in 1929, just before the Great Depression dried up available funds. By the time the economic crisis had eased, Tiffany Studios had been liquidated (in 1937), and new Tiffany windows were unobtainable.

The Tiffany windows were designed by Frederick Wilson (1858–1932), Tiffany's chief designer for ecclesiastical windows. He made extensive use of Tiffany's special glassmaking technologies, including confetti glass, iridescent glass, 3D-textured "drapery glass", pastel colors for "painting in glass", and the trademark opalescent “Favrile” glass. There are as many as six or seven layers of glass in a Tiffany window, producing visual textures that would otherwise have to be painted in. Only some fine details impractical to produce in glass were hand-painted, in permanent enamel. The Arlington Street Church holds the complete set of Wilson's original watercolor design drawings for all the windows.

The windows on the lower level feature incidents from the early life of Jesus, while the windows for the galleries on the upper level feature his Beatitudes, or blessings. Each window has a border of decorative acanthus-leaf scrolls, echoing the capitals of the Corinthian columns of the sanctuary. Full-color images of all the Tiffany windows can be seen at the Arlington Street Tiffany Education Center website.

After vandalism destroyed a memorial dedication pane in the 1970s, plexiglas sheets were installed on the exterior side of the Tiffany windows for protection. Over time, the plastic discolored to a bluish tinge and transmitted less light, as an accumulated film of dirt also clouded the stained glass. In the 21st century, the plastic sheets have been replaced, and the glass has been cleaned to restore its original beauty. In 2015, $120,000 in funds was raised to begin restoration of the Tiffany windows. As of 2019[update], night-time lighting is being installed, so that the Tiffany windows can be viewed from outside the building.

After a 50-year period when the Tiffany windows were only viewed by the congregation, the church is now open to the general public from 10 to 3 daily from mid-May through the end of October, except Sunday and when special events are scheduled. Guided tours and self-guided tours (with optional smartphone audio) are available, as well as group tours by prearrangement.

Most of the main floor is wheelchair accessible. The fully accessible Arlington station on the MBTA Green Line is immediately adjacent to the church., at the corner of Boylston Street and Arlington Street.

All content from Kiddle encyclopedia articles (including the article images and facts) can be freely used under Attribution-ShareAlike license, unless stated otherwise. Cite this article:
Arlington Street Church Facts for Kids. Kiddle Encyclopedia.