The Kentucky coffeetree, Gymnocladus dioicus, is a tree in the subfamily Caesalpinioideae of the legume family Fabaceae, native to the Midwest and Upper South of North America. The seed may be roasted and used as a substitute for coffee beans; however, unroasted pods and seeds are toxic. The wood from the tree is used by cabinetmakers and carpenters. It is planted as a street tree.

From 1976 to 1994, the Kentucky coffeetree was the state tree of Kentucky, after which the tulip poplar was returned to that designation.

The tree varies from 18 to 21 meters (60–70 feet) high with a spread of 12–15 meters (40–50 feet) and a trunk up to one meter (3 feet) in diameter. The tree grows at a medium rate with height increases of anywhere from 12" to 24" per year. A 10-year-old sapling will stand about 4 meters (13 feet) tall. It usually separates 3 to 4½ meters (10–15 feet) from the ground into three or four divisions which spread slightly and form a narrow pyramidal head; or when crowded by other trees, sending up one tall central branchless shaft to the height of 15–21 m (50–70 ft). Branches are stout, pithy, and blunt; roots are fibrous.

The Kentucky coffeetree is a moderately fast-growing tree, and male trees are often grown in parks and along city streets for ornamental purposes. The tree is typically fairly short-lived, healthy trees living from 100 to 150 years. The Kentucky coffeetree sheds its leaves early during the fall and appears bare for up to 6 months. The naked appearance of the tree is reflected through the Kentucky coffeetree's Greek genus name, which means "naked branch". Like the Sumac, branches are absent of fine spray; smaller branches are thick and lumpish. Because of the absence of smaller branches and its later leafing, the French in Canada named it Chicot, "stubby". The expanding leaves are conspicuous because of the varied colors of the leaflets; the youngest are bright pink, while those which are older vary from green to bronze. 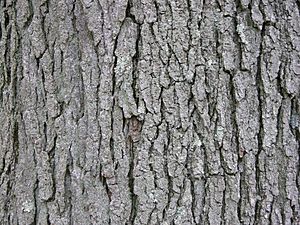 Bark of the Kentucky coffeetree 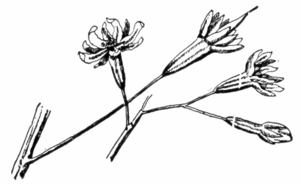 The bark is ash-gray and scaly, flaking similarly to black cherry, but more so. The trees are dioecious, and the fruit is a hard-shelled bean in heavy, woody, thick-walled pods filled with sweet, thick, gooey pulp. Pod length ranges from 5 to 10 inches (130 to 250 mm); unfertilized female trees may bear miniature seedless pods. The beans contain the toxin cytisine. 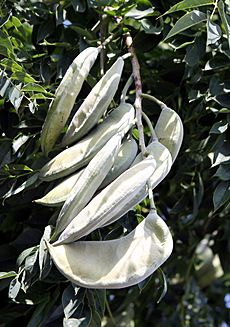 Gymnocladus is derived from the Ancient Greek κλάδος (kládos) "branch" and γυμνός (gumnós) "naked" and refers to the stout branchlets unclothed with small twigs.

The name is sometimes hyphenated as 'coffee-tree'; the form 'coffeetree' here is as used officially by the United States Forest Service.

The Kentucky coffeetree is considered a rare tree species. "Rare species are those that are so uncommon that they should be monitored to determine whether their populations are becoming threatened." It is widely distributed, but rare.

The tree's native range is limited, occurring from Southern Ontario, Canada and in the United States from Kentucky (where it was first encountered by Europeans) and western Pennsylvania in the east, to Kansas, eastern Nebraska, and southeastern South Dakota in the west, to southern Wisconsin and Michigan in the north, and to northern Louisiana in the south. It is planted as an urban shade tree across the United States and eastern Canada, including California.

This tree usually occurs as widely dispersed individuals or small colonial groups with interconnected root systems. This tree is found in floodplains and river valleys but is also sometimes seen on rocky hillsides and limestone woods. In the northeastern part of its range, seemingly natural groves of this tree are actually associated with known prehistoric village sites. In some parts of its range, this tree may be used as an indicator of the presence of limestone or of calcareous soils.

The Kentucky coffeetree is considered an example of evolutionary anachronism. The tough, leathery seed pods are too difficult for many animals to chew through (in addition to being poisonous) and they are too heavy for either wind or water dispersal. It is thus believed that the tree would have been browsed upon by now-extinct mammalian megafauna. which ate the pods and nicked the seeds with their large teeth, aiding in germination. This behavior is seen among African elephants eating Fabaceae relatives in Africa. Because of this, its prehistoric range may have been much larger than it has been in historical times. Today, in the wild, it only grows well in wetlands, and it is thought that only in such wet conditions can the seed pods rot away to allow germination in the absence of large herbivores. 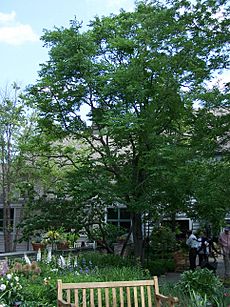 Gymnocladus dioicus is considered well-suited to urban environments, as it is tolerant of poor soils, has extreme drought tolerance, and is not vulnerable to serious insect infestations or disease problems. It is cultivated by specialty tree plant nurseries as an ornamental tree for planting in gardens and parks. The peculiarly late-emerging and early-dropping leaves, coupled with the fact that the large leaves mean few twigs in the winter profile, make it a tree that is ideal for urban shading where winter sunlight is to be maximized (such as in proximity to solar hot-air systems).

It is often planted because of its unique appearance and interesting character. There are several Kentucky coffeetrees at Mount Vernon, in the gardens along the path leading up to the house of George Washington.

Trees prefer a rich moist soil, such as bottom lands. Their growth is largely unaffected by heat, cold, drought, insects, disease, road salt, ice, and alkaline soil. Kentucky coffeetree is easy to grow from seed. Filing the seedcoat by hand with a small file, and then soaking the seeds in water for 24 hours will ensure rapid germination. Propagation is also easy from dormant root cuttings from December through March.

The Kentucky coffeetree is typically found on "alluvial soils of river and flood plains and nearby terraces". Here it can form large clonal colonies, reproducing by shoots sprouting from roots.

The beans of the tree were eaten, after roasting, in the Meskwaki (Fox), Ho-Chunk (Winnebago) and Pawnee Native American cultures.

The Meskwaki also drank the roasted ground seeds in a hot beverage similar to coffee. The common name "coffeetree" derives from this latter use of the roasted seeds, which was imitated by settlers because it seemed a substitute for coffee, especially in times of poverty, similar to chicory. The European colonialists, however, considered it inferior to "real" coffee:

The pods, preserved like those of the tamarind, can be eaten and are slightly aperient (laxative). Roasting the pods and seeds neutralizes the cytisine, the toxic alkaloid.

Caution should be used when consuming, as unroasted or only partially roasted beans and pods are considered poisonous and are reputed to contain the alkaloid cytisine.

The plant is toxic to some animals.

In addition to use as a food, the seeds of Kentucky coffeetree were used by Native Americans for ceremonial and recreational purposes. Seeds were used as dice in games of chance that were common in eastern tribes. The seeds were also used in jewelry. The importance of Kentucky coffeetree to Native Americans undoubtedly contributed to its dispersal.

Gymnocladus dioicus is used as a street tree as far north as Montréal Québec. It resists well harsh winters and de-icing salts.

The wood is used both by cabinetmakers and carpenters. It has very little sapwood.

A specimen with a height of 26 metres (85 ft) was referenced in La Turpinerie, commune of Geay, a short distance from the Charente river in south-west France, growing in a typical calcareous soil (see Minutes of Congrès international de sylviculture de Paris, June 1900). Cut during the 20th century, it had a circumference of 2.8 metres (9 ft 2 in) and was the tallest in the country at this time.

A Kentucky coffeetree, said to have been brought to the UK in 1812, stands in Mountsfield Park in the London Borough of Lewisham.

A Kentucky coffeetree found in the Will Rogers Park in Amarillo, Texas has been confirmed to be the largest of its kind in Texas. Texas A&M Forest Service said, has a circumference of 92 inches, a height of 51 feet and a crown spread of 52 feet.

At the U.S. Space & Rocket Center in Huntsville, Alabama, 19 Kentucky coffeetrees are planted in the Apollo courtyard prior to entry into the museum.

All content from Kiddle encyclopedia articles (including the article images and facts) can be freely used under Attribution-ShareAlike license, unless stated otherwise. Cite this article:
Kentucky coffeetree Facts for Kids. Kiddle Encyclopedia.