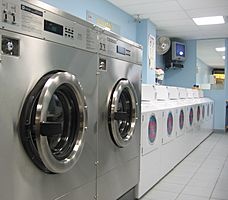 Example of a laundromat 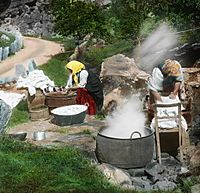 Laundry is the washing of clothing. Laundry is often done in a special room called a laundry room. Some shared homes have shared laundry rooms. Businesses that wash clothes are called laundromats or launderettes.

Laundry is done by washing with soap and water or detergent and water. The clothing is stirred roughly in the soapy water, and then moved to be rinsed in clean water. Washing can be done by hand or with a washing machine. The clothing is dried in a clothes dryer or on a clothesline. Sometimes after the clothes are dry, they are ironed or pressed.

All content from Kiddle encyclopedia articles (including the article images and facts) can be freely used under Attribution-ShareAlike license, unless stated otherwise. Cite this article:
Laundry Facts for Kids. Kiddle Encyclopedia.