Pohnpei "upon (pohn) a stone altar (pei)" (formerly known as Ponape or Ascension) is an island of the Senyavin Islands which are part of the larger Caroline Islands group. It belongs to Pohnpei State, one of the four states in the Federated States of Micronesia (FSM). Major population centers on Pohnpei include Palikir, the FSM's capital, and Kolonia, the capital of Pohnpei State. Pohnpei Island is the largest (334 km²), with a highest point (almost 800m), most populous (34,000 people), and most developed single island in the FSM.

Pohnpei contains a wealth of biodiversity. It is one of the wettest places on Earth with annual recorded rainfall exceeding 7,600 millimetres (300 in) each year in certain mountainous locations. It is home to the ka tree (Terminalia carolinensis) found only in Pohnpei and Kosrae. 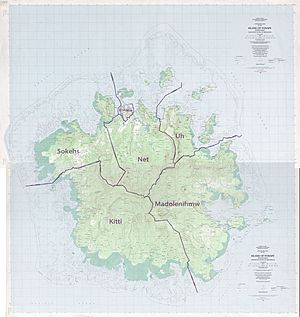 Detailed map of Pohnpei, showing the borders of the five 'independent tribes' 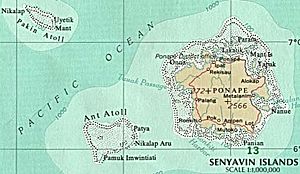 The highest point of the island is Mount Nanlaud at 772 or 782 metres. Pohnpei is home to several dozen bird species including four endemic species, the Pohnpei lorikeet, the Pohnpei fantail, the Pohnpei flycatcher and the long-billed white-eye. A fifth endemic, the Pohnpei starling, is thought to have recently gone extinct.

The only land reptiles are a few species of lizard. Originally, only three mammals existed: rats, bats and dogs. Pigs were introduced, and some are now feral, as are the deer brought during German times. The lagoons are rich in fish, mollusks, turtles and other marine fauna. 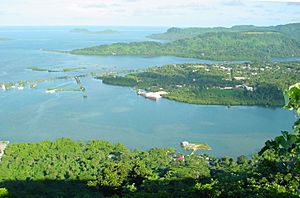 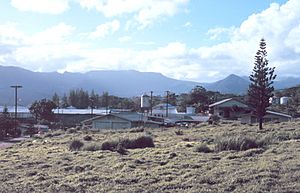 District center of Pohnpei Circa 1960

Pohnpei belongs to the Tropical rainforest climate zone (Köppen: Af). It is one of the wettest places on earth with an average annual recorded rainfall of 4,775 mm (188.0 in) in towns along the coast and about 7,600 mm (300 in) each year in certain mountainous locations.

All content from Kiddle encyclopedia articles (including the article images and facts) can be freely used under Attribution-ShareAlike license, unless stated otherwise. Cite this article:
Pohnpei Facts for Kids. Kiddle Encyclopedia.