The spotted salamander or yellow-spotted salamander (Ambystoma maculatum) is a mole salamander common in eastern United States and Canada. The spotted salamander is the state amphibian of Ohio and South Carolina. This salamander ranges from Nova Scotia, to Lake Superior, to southern Georgia and Texas. Its embryos have been found to have symbiotic algae living inside them, the only known example of vertebrate cells hosting an endosymbiont microbe (unless mitochondria is considered). 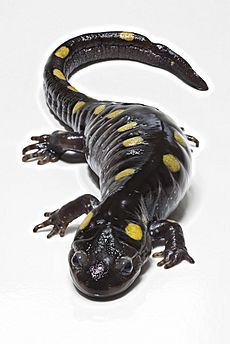 The spotted salamander usually makes its home in hardwood forest areas with vernal pools, which are necessary for breeding. They cannot breed in most permanent pools because the fish inhabiting the pools would eat the salamander eggs and larvae. Spotted salamanders are fossorial, meaning they spend most of their time underground. They rarely come above ground, except after a rain or for foraging and breeding. During the winter, they brumate underground, and are not seen again until breeding season in early March–May.

Ambystoma maculatum has several methods of defense, including hiding in burrows or leaf litter, autotomy of the tail, and a toxic milky liquid it excretes when perturbed. This secretion comes from large poison glands around the back and neck. The spotted salamander, like other salamanders, shows great regenerative abilities: if a predator manages to dismember a part of a leg, tail, or even parts of the brain, head, or organs, the salamander can grow back a new one, although this takes a massive amount of energy. As juveniles, they spend most of their time under the leaf litter near the bottom of the pools where their eggs were laid. The larvae tend to occupy refuges in vegetation, and lower their activity in the presence of predators. 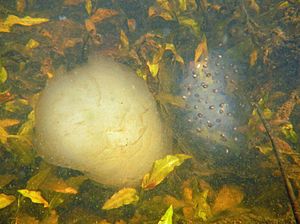 During the majority of the year, spotted salamanders live in the shelter of leaves or burrows in deciduous forests. However, when the temperature rises and the moisture level is high, the salamanders make their abrupt migration towards their annual breeding ponds. In just one night, hundreds to thousands of salamanders may make the trip to their ponds for mating. Mates usually breed in ponds when it is raining in the spring. Females usually lay about 100 eggs in one clutch that cling to the underwater plants and form egg masses.

The egg masses are round, jelly-like clumps that are usually 6.4–10.2 cm (2.5–4 in) long. The spotted salamander produces a unique polymorphism in the outer jelly layers of its egg masses: one morph has a clear appearance and contains a water-soluble protein, whereas the other morph is white and contains a crystalline hydrophobic protein. This polymorphism is thought to confer advantages in ponds with varying dissolved nutrient levels, while also reducing mortality from feeding by wood frog larvae.

Adults only stay in the water for a few days, then the eggs hatch in one to two months. Eggs of A. maculatum can have a symbiotic relationship with the green alga Oophila amblystomatis. Jelly coating prevents the eggs from drying out, but it inhibits oxygen diffusion (required for embryo development). The Oophila alga photosynthesizes and produces oxygen in the jelly. The developing salamander thus metabolizes the oxygen, producing carbon dioxide (which then the alga consumes). Photosynthetic algae are present within the somatic and possibly the germ cells of the salamander. When the eggs hatch depends on the water temperatures. 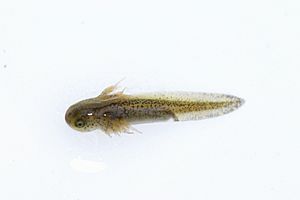 As larvae, they are usually light brown or greenish-yellow. They have small dark spots and are born with external gills. In two to four months, the larvae lose their gills, and become juvenile salamanders that leave the water. Spotted salamanders have been known to live up to 32 years, and normally return to the same vernal pool every year. These pools are seasonal and will usually dry up during the late spring and stay dry until winter.

All content from Kiddle encyclopedia articles (including the article images and facts) can be freely used under Attribution-ShareAlike license, unless stated otherwise. Cite this article:
Spotted salamander Facts for Kids. Kiddle Encyclopedia.