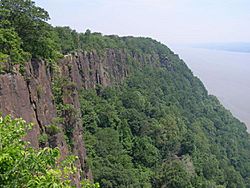 The Palisades Sill as seen from the Palisades Interstate Parkway. The Hudson River is the background

The Palisades Sill is a Triassic intrusion, formed 200 million years ago. It runs through parts of New York and New Jersey. It is noteworthy for The Palisades, cliffs which rise steeply above the western bank of the Hudson River. The visibility of the sill,and its unique features, have got much attention from nature enthusiasts, rock climbers, and geologists. 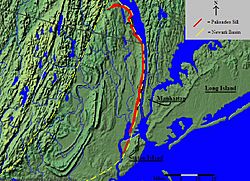 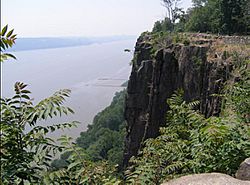 The Palisades rising above the Hudson River

The outcrop of the Palisades Sill is quite recognizable for its prominent cliffs above the Hudson River; it is easily seen from the western portions of Manhattan. The exposure is approximately 80 kilometers (50 mi) long, most of it following the Hudson River. It first emerges in Staten Island in New York City. The sill then crosses the state line into New Jersey, where Hoboken, Jersey City, Union City, Fort Lee, and Englewood Cliffs all lie on it. 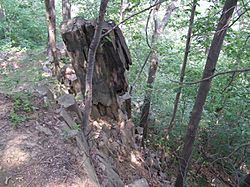 Columnar jointing in the Palisades Sill

The end of the Triassic saw large-scale rifting during the break-up of Pangaea. What is now eastern North America began to separate from what is now north-western Africa, creating the young Atlantic Ocean. Magma came from decompression melting, and some was pushed into the pre-existing sandstones and arkoses. The magma solidified and, after millions of years, the overlying rocks got uplifted and eroded, exposing the Palisades Sill as we see it.

There is an average stratigraphic thickness of 300 meters (~1000 feet), with the famous cliffs rising 100 meters (300 ft) on average above sea level. The intrusion dips between 10 and 15 degrees westward for most of its length. The sill was intruded at a depth of about 3-5 kilometers. These studies also concluded that the sill was in a position nearly identical to its current one (10-to-15-degree dip); this is further confirmed by the still-vertical orientation of the columnar jointing.

The Watchung basalt flows of the Watchung Mountains are eruptions onto the surface of the same magma that created the Palisades Sill.

All content from Kiddle encyclopedia articles (including the article images and facts) can be freely used under Attribution-ShareAlike license, unless stated otherwise. Cite this article:
Palisades Sill Facts for Kids. Kiddle Encyclopedia.