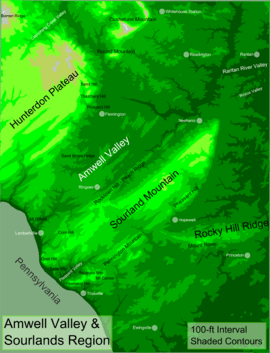 The Amwell Valley is a small valley in Hunterdon County, New Jersey, between the Hunterdon Plateau and the Sourlands. It comprises Stockton, parts of Delaware Township, West Amwell, East Amwell, Flemington and Raritan Township. The region borders the Delaware River to the west and the South Branch Raritan River to the east. The entire area has elevations around two-hundred feet above sea level. US 202 (including a shared section with NJ 31) is the main route running west to east through the valley. Old York Road also passes through the valley, taking a generally more southern route (Old York crosses 202 twice in the area) through Raritan and along the Sourlands at Mount Airy. Like the Hunterdon Plateau, Amwell Valley still has a large number of farms due to its sufficient climate, relatively flat land and the presence of silt-loams soils. The valley is home to Unionville Winery and Old York Cellars in Ringoes.

All content from Kiddle encyclopedia articles (including the article images and facts) can be freely used under Attribution-ShareAlike license, unless stated otherwise. Cite this article:
Amwell Valley Facts for Kids. Kiddle Encyclopedia.