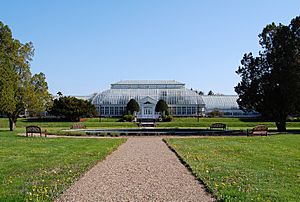 Duke Gardens in Somerset County, New Jersey were among the most significant glass house collections in America. Created by Doris Duke herself, the aerial view confirms they were larger than the New York Botanical Garden's Haupt Conservatory, and were open to the public from 1964. They were closed by the Doris Duke Charitable Foundation [2] on or before May 25, 2008 and the plant material was donated to public gardens throughout the United States. 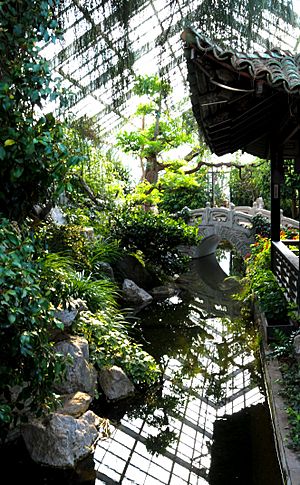 Miss Duke developed these exotic display gardens in honor of her beloved father James Buchanan Duke, Inspired by DuPont's Longwood Gardens, each of the eleven Duke Display Gardens is a full-scale re-creation of a garden theme, country or period. Display construction began in 1958. Miss Duke both designed the displays and labored on their installation, sometimes working 16-hour days. In 1960 she donated 10 acres (4.0 ha) of her estate, including the greenhouses, to the Duke Gardens Foundation, Inc.[3]

The Duke Farms website stated that "Doris Duke had long been personally involved in the construction, repair and remodeling of her properties, and she was directly involved in the physical design of the Indoor Display Gardens. Although she lacked specific botanical knowledge, she had a clear vision of the spaces and features she wanted to create. According to the New York Post, she designed all but one of the gardens, incorporating her interests in color, design and fragrance."[4] (Following the closure, this text is no longer present on the website [5]).

Doris Duke continued her involvement with her gardens throughout her life, bringing designers with her to modify them during the summer season when they were closed to tourists. In the 1970s she added extensive night-lighting, and introduced public tours of the gardens at night. A rediscovered image of the "stunning nightlighting of the French Gardens" [6] was used as one centerpiece of social protest against the closure.

Description of the gardens

Duke Gardens formed four sides of a quadrangle, and took at least one hour to view. The entry fell on the side formed by a Conservatory designed by Horace Trumbauer and constructed 1909-17. The other three sides were formed by greenhouses in styles that are still manufactured. The greenhouse over the English Garden was installed in the 1990s.

Duke Gardens were visited in the following sequence:

Closure and removal of Duke Gardens 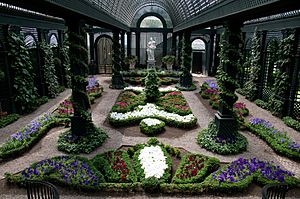 The French Garden on the day before closure. Contrast with the same garden in Miss Duke's lifetime [1] to see effect of garden staff reductions.

In March 2008 Duke Farms announced "an expansive and bold new vision for the 2,740-acre (1,110 ha) property, in which it will refocus its programs and operations to become an environmental showcase and learning center. The first major change will be the conclusion in May 2008 of tours of the 11 indoor display gardens".

Although the Duke Farms website states that "The Indoor Display Gardens reveal the interests and philanthropic aspirations of Doris Duke, as well as an appreciation for other cultures and a yearning for global understanding", representatives of the Doris Duke Charitable Foundation (DDCF) more recently stated that the Gardens are "perpetuating the Duke family history of personal passions and conspicuous consumption." "The jewel-like gardens will remain open until May 25, after which they will be dismantled. According to DDCF sources, the day of the display gardens is past. They consume an inordinate share of financial and staff resources, they would require a very expensive modernization, and they no longer reflect the vision of Duke Farm’s future. A video record has been made for archival purposes."

The current garden tours are closing partly to use the building as a staging area for plants, while the other conservatory building is emptied and renovated, officials said. As for the plants there, [Executive Director Tim] Taylor said some may be used in the new gardens, though the concept will be different. "It will not be replicated in terms of the gardens of the nations. We'll put a different spin on them, and come up with a logical connecting story of native horticulture to exotic horticulture," he said. Leftover plants will be donated to other botanical and display gardens, Taylor said. "We're not destroying anything."

Other gardens on Duke Farms site

The Duke Gardens Foundation, Inc, established in 1959 and now part of Duke Farms Foundation, must "maintain a horticultural and botanical establishment for the purpose of scientific experimentation and public education and enjoyment". With closure of Duke Gardens, the Duke Farms Foundation created new indoor and outdoor display gardens as part of Duke Farms. Indoor gardens are presented in the renovated Lord & Burnham conservatory (c.1900), now known as the Orchid Range [11]. Duke Farms opened to the public on May 19, 2012.

All content from Kiddle encyclopedia articles (including the article images and facts) can be freely used under Attribution-ShareAlike license, unless stated otherwise. Cite this article:
Duke Gardens (New Jersey) Facts for Kids. Kiddle Encyclopedia.