Bodie Island ( BAH-dee) is a long, narrow barrier peninsula that forms the northernmost portion of the Outer Banks. The land that is most commonly referred to as Bodie Island was at one time a true island, but in 1811 Roanoke Inlet, which had separated it from the Currituck Banks in the north, closed. As a result, the Currituck Banks and Bodie Island are now one contiguous peninsula, joined together at the Nags Head area, where the inlet once flowed. Today, either name can be used to refer to peninsula as a whole, but both portions colloquially retain their historical names. 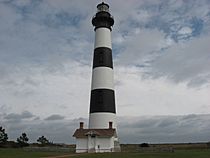 Bodie Island was originally known as Bodie's Island or Body's Island and was named for a family of that name, variously written as "Body" "Boddye" "Boddy" and "Bodie" that settled there. Robert Boddy/Boddie emigrated to Virginia from London, England on August 10, 1635 on HMS Safety. He settled in Isle of Wight and some of his descendants later settled in what later became North Carolina, South Carolina and Mississippi. Bodie island was named for his descendants who settled the area. The family was originally from Ingatestone, Essex, England which is where their coat of arms originated as well, augmentation by Elizabeth I to John Boddie for service during the naval battle with the Spanish Armada. Their history is noted in Seventeenth Century Isle of Wight County, Virginia Folklore sometimes attributes the naming of the island to the dead "bodies" of drowned sailors that washed up from the ships that ran aground and sank off the Outer Banks in what is now known as the Graveyard of the Atlantic.

Inlets frequently open and close along the Outer Banks, making landform naming inconsistent. Bodie Island, when it was an island, extended farther south than it does today. The island was originally formed around 1738, when New Inlet opened, separating Bodie Island from Hatteras Island to the south. The opening of Oregon Inlet in 1846 truncated the southern portion of Bodie Island, forming a new island situated between Bodie and Hatteras. The new barrier island was given the name Pea Island, but the wider, more powerful Oregon Inlet led to the eventual closure of New Inlet around 1933. Pea Island thus became a part of Hatteras Island until 2011 when New Inlet reopened during Hurricane Irene.

Explorer John Lawson mentions Bodies Island just once in his 1709 book A New Voyage to Carolina, when discussing fauna of North Carolina, in particular, a species of rabbit. He wrote the following: "I was told of several that were upon Bodies Island by Ronoak, which came from that Ship of Bodies;" This would indicate that Bodie Island was so named as early as 1709.

The following is a list of places found on the peninsula, listed from south to north.

Bodie Island can be accessed from North Carolina mainland from the Wright Memorial Bridge, originally built in 1966. It can also be accessed from U.S. Route 64 since the Washington Baum Bridge opened in 1994. Motorists driving north on the Outer Banks from Hatteras and Pea Islands reach the Currituck Banks on NC highway 12.

The north end of the peninsula is accessible by Sandpiper and Sandfiddler Roads via Sandbridge Road, but there is no highway connecting the Virginia portion of the Currituck Banks with the North Carolina portion, and even driving on the beach is no longer permitted north of the North Carolina border. Plans for an additional access point near Corolla which would be called the Mid-Currituck Bridge are currently on hold.

All content from Kiddle encyclopedia articles (including the article images and facts) can be freely used under Attribution-ShareAlike license, unless stated otherwise. Cite this article:
Bodie Island Facts for Kids. Kiddle Encyclopedia.