Oregon Inlet is an inlet along North Carolina's Outer Banks. It joins the Pamlico Sound with the Atlantic Ocean and separates Bodie Island from Pea Island, which are connected by the 2.5 mile Herbert C. Bonner Bridge that spans the inlet. As one of the few access points to the ocean along this stretch of coast, Oregon Inlet is a major departure point for charter fishing trips, with a nearby harbor serving as the base for many large boats that travel miles out towards the Gulf Stream almost every day. The inlet is also the location of a U.S. Coast Guard station.

Oregon Inlet was formed when a hurricane lashed the Outer Banks in 1846, separating Bodie Island from Pea Island. One ship that rode out that storm in Pamlico Sound was named the Oregon. After the storm the crew members of this ship were the first to tell those on the mainland about the inlet's formation. Hence, it has been known as Oregon Inlet ever since.

Akin to many other inlets along the Outer Banks, Oregon Inlet moves southward due to drifting sands during tides and storms. It has moved south over two miles since 1846, averaging around 66 feet per year. 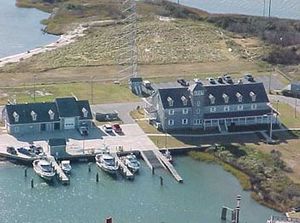 The Coast Guard station at Oregon Inlet is currently located at its fourth site since it began as a lifesaving station in 1883. It was one of 29 lifesaving stations Congress approved and appropriated funds for a decade earlier. By 1888, the Oregon Inlet Station had to be relocated to a new site. It is assumed that this relocation was necessary because of the shifting of the channel to the south and the encroachment of the ocean from the east. The station was decommissioned and moved to a new safer location some 400 feet westward toward the sound.

In July 1990, a ceremonial ground breaking was held for a new $3.5 million building, located just behind the Oregon Inlet Fishing Center, on the north side of the inlet. The new station was designed with the traditional architectural design of older stations located on the Outer Banks in mind.

The Herbert C. Bonner Bridge is a two-lane automobile bridge spanning the Oregon Inlet, between Bodie Island from Pea Island, in Dare County, North Carolina. The bridge carries NC 12 and is utilized by local and seasonal tourist traffic. The 2.7-mile (4.3 km) bridge was built in 1963 and is dedicated to Herbert C. Bonner.

Prior to the building of the bridge, Hatteras Island was only accessible by air or ferry. Ferries could carry a maximum of 2,000 people per day. The ferries cost the state $500,000 per year to operate, and there were very long lines waiting for the ferries during peak season. The Bonner Bridge cost $4 million to build and moves up to 14,000 cars a day in both directions. Of that amount, the state of North Carolina paid $1.5 million, and the federal government paid $2.5 million. The arrangement for a portion of the state's cost to be paid by the National Park Service was arranged by Rep. Herbert C. Bonner, for whom the bridge is named.

The environmental impact on the bridge and road was not fully understood at the time of construction, and now constant beach erosion, severe weather and high volume of traffic continually forces the state to protect the integrity of the road system. As much as $50 million was spent between 1987 and 1999 to repair and protect the Bonner Bridge and NC 12 from the ocean. The bridge was due for replacement by the early 1990s but construction on the new bridge has been continually held back by environmental lawsuits brought by the Southern Environmental Law Center.

The Bonner Bridge was expected to have a thirty-year lifespan. The bridge handles about 2 million cars per year, and the state DOT ranks it a 4 on a scale of 1 to 100, with 100 being the safest.

In October 1990, a dredge collided with the bridge during a storm, causing severe damage to several of the spans. While isolated, Hatteras Island could only be accessed by boat or plane for many weeks while emergency construction was underway to replace its only highway link to the mainland.

The Federal Highway Administration has approved the plan to replace the bridge over Oregon Inlet that connects with Pea Island and lies within the Cape Hatteras National Seashore. The final alignment of the bridge has not yet been determined. Once a final alignment is chosen, construction of the new bridge, which will be longer and curve farther inland, will begin. It will cost approximately $1.3 billion and should by completed by 2014, although it is likely to be later. On July 26, 2011 NCDOT awarded a $215.8 million contract to replace the bridge. In September 2013 the last of the legal obstacles were handled after a judge ruled in favor of the new bridge to be constructed. Construction was set to begin in early 2013 but was halted once again after an appeal was filed by the SELC. The new bridge should open to traffic in spring 2015 and the majority of the existing bridge will be demolished by 2016 (a portion will remain as a fishing pier).

On December 3, 2013, NCDOT closed the bridge due to immediate safety concerns. Routine sonar scanning of the bridge identified scouring concerns, or areas where too much sand has eroded from the support structure of the bridge. “Closing the Bonner Bridge is necessary to keep all travelers safe, but we know it will have a devastating effect on the people who live along and visit the Outer Banks,” said NCDOT Secretary Tony Tata. “We will work to safely reopen this vital lifeline quickly, and hope to be able to begin construction on a new bridge as soon as possible.” Until it is safe to reopen, The NCDOT Ferry Division will provide emergency support to move people and cars across the Pamlico Sound. After sand was dredged to support some of its pilings, the bridge reopened to traffic on December 15, 2013.

On December 16, 2015 crews from Cape Hatteras Electric Cooperative began moving underground electric cables, which are subsequently attached to the old Bonner Bridge, that connect Hatteras Island to the cooperative's power supplier Dominion North Carolina Power. This was done in order for construction of the new bridge to begin and signaled the beginning of the bridge construction process. The official groundbreaking for construction of the new Bonner Bridge was held on March 8, 2016. The project is expected to cost $246 million and be completed by 2019.

All content from Kiddle encyclopedia articles (including the article images and facts) can be freely used under Attribution-ShareAlike license, unless stated otherwise. Cite this article:
Oregon Inlet Facts for Kids. Kiddle Encyclopedia.