Bellview Winery is a winery in the Landisville section of Buena in Atlantic County, New Jersey. A family produce farm since 1914, the vineyard was first planted in 2000, and opened to the public in 2001. Bellview has 40 acres of grapes under cultivation, and produces 8,000 cases of wine per year. The farm was named by the great-grandfather of the current owner, and is of Italian origin. 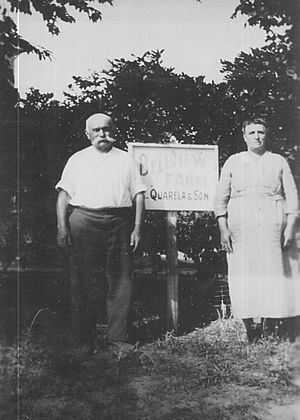 Bellview Winery is in the Outer Coastal Plain AVA, and produces wine from Blaufränkisch (Lemberger), Cabernet Franc, Cabernet Sauvignon, Cayuga White, Chambourcin, Chardonnay, Fredonia, Ives noir, Merlot, Muscat Ottonel, Niagara, Petit Verdot, Pinot gris, Syrah, Tinta Cão, Touriga Nacional, Traminette, Vidal Blanc, and Viognier grapes. Bellview also makes fruit wines from apples, blueberries, cranberries, and dandelions. It is one of only a handful of wineries in the United States that produces wine from dandelions (Taraxacum officinale). Bellview is also the only New Jersey winery that uses Tinta Cão and Touriga Nacional, which are red vinifera grapes indigenous to Portugal that are often used to make port. The winery was a participant at the Judgment of Princeton, a wine tasting organized by the American Association of Wine Economists that compared New Jersey wines to premium French vintages.

Bellview operates under a Plenary Winery License from the New Jersey Division of Alcoholic Beverage Control, allowing it to produce an unrestricted amount of wine, as well as operate up to 15 off-premises sales rooms. As a result of further legislation in 2012, Bellview Winery also has the option to mail wine directly to some consumers, under new Direct Shipping laws in the state. Combined with Direct Shipping laws, Bellview's license allows the shipment of up to 12 cases per year to consumers In or Out-Of-State.

All content from Kiddle encyclopedia articles (including the article images and facts) can be freely used under Attribution-ShareAlike license, unless stated otherwise. Cite this article:
Bellview Winery Facts for Kids. Kiddle Encyclopedia.