Egg Harbor City was founded in 1854 by German Americans from Philadelphia as a refuge for those being persecuted in the anti-immigrant violence known as the Know-Nothing movement. It remained an island of German language and culture in South Jersey for more than 50 years.

Egg Harbor City was incorporated as a city by an act of the New Jersey Legislature on June 14, 1858, from portions of Galloway Township and Mullica Township. The city was reincorporated on February 13, 1868. The city's named comes from the gull eggs found in the area.

The city is one of 56 South Jersey municipalities that are included within the New Jersey Pinelands National Reserve, a protected natural area of unique ecology covering 1,100,000 acres (450,000 ha), that has been classified as a United States Biosphere Reserve and established by Congress in 1978 as the nation's first National Reserve. All of the city is included in the state-designated Pinelands Area, which includes portions of Atlantic County, along with areas in Burlington, Camden, Cape May, Cumberland, Gloucester and Ocean counties.

There were 1,593 households out of which 30.2% had children under the age of 18 living with them, 39.0% were married couples living together, 21.3% had a female householder with no husband present, and 32.5% were non-families. 25.3% of all households were made up of individuals, and 8.5% had someone living alone who was 65 years of age or older. The average household size was 2.64 and the average family size was 3.13. 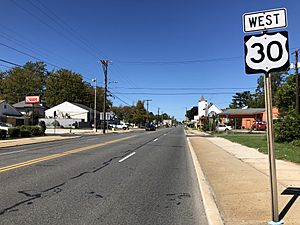 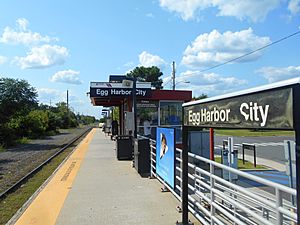 The closest limited access road is the Atlantic City Expressway which is two towns away in Hamilton Township while the Garden State Parkway is accessible in neighboring Galloway Township.

NJ Transit provides bus service to and from Atlantic City on the 554 route.

The Egg Harbor City School District is responsible for the education of public school children in pre-kindergarten through eighth grade. As of the 2018–19 school year, the district, comprised of two schools, had an enrollment of 548 students and 51.0 classroom teachers (on an FTE basis), for a student–teacher ratio of 10.7:1. Schools in the district (with 2018–19 enrollment data from the National Center for Education Statistics) are Charles L. Spragg School with 277 students in PreK to Grade 3 and Egg Harbor City Community School with 257 students in grades 4 to 8.

Students in ninth through twelfth grades attend Cedar Creek High School, which is located in the northern section of Egg Harbor City and opened to students in September 2010. As of the 2018–19 school year, the high school had an enrollment of 930 students and 73.4 classroom teachers (on an FTE basis), for a student–teacher ratio of 12.7:1. The school is one of three high schools operated as part of the Greater Egg Harbor Regional High School District, which also includes the constituent municipalities of Egg Harbor City, Galloway Township, Hamilton Township and Mullica Township, and participates in sending/receiving relationships with Port Republic and Washington Township (Burlington County). Cedar Creek High School is zoned to serve students from Egg Harbor City, Mullica Township, Port Republic and Washington Township, while students in portions of Galloway and Hamilton townships have the opportunity to attend Cedar Creek through the school of choice program or through attendance in magnet programs offered at Cedar Creek. Seats on the nine-member board are allocated based on the population of the constituent municipalities, with one seat assigned to Egg Harbor City.

Township public school students are also eligible to attend the Atlantic County Institute of Technology in the Mays Landing section of Hamilton Township or the Charter-Tech High School for the Performing Arts, located in Somers Point.

The Pilgrim Academy is a private Christian school. Founded by Dr. Warren Allem in 1971, the school teaches children from kindergarten through 12th grade. The name is taken from John Bunyan's allegorical novel The Pilgrim's Progress.

The Roman Catholic Diocese of Camden formerly maintained the St. Nicholas School in Egg Harbor. It closed in 2007 with a private elementary school opening in its place.

People who were born in, residents of, or otherwise closely associated with Egg Harbor City include:

All content from Kiddle encyclopedia articles (including the article images and facts) can be freely used under Attribution-ShareAlike license, unless stated otherwise. Cite this article:
Egg Harbor City, New Jersey Facts for Kids. Kiddle Encyclopedia.