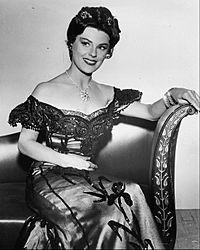 Betty Jane "Kathleen" Crowley (December 26, 1929 – April 23, 2017) was an American actress. She was born in Green Bank, New Jersey. She starred in a number of TV shows and movies throughout the 1950s and 1960s, ending her career in 1970. She was known for her multiple small roles in the TV series Maverick.

All content from Kiddle encyclopedia articles (including the article images and facts) can be freely used under Attribution-ShareAlike license, unless stated otherwise. Cite this article:
Kathleen Crowley Facts for Kids. Kiddle Encyclopedia.