Borgata Hotel Casino & Spa is a hotel, casino, and spa in Atlantic City, New Jersey, United States. It is owned and operated by MGM Resorts International. The casino hotel features 2,798 rooms and is the largest hotel in New Jersey. Borgata opened in July 2003 and is the top-grossing casino in Atlantic City.

Borgata opened on July 2, 2003, at 11:45 pm, as a joint venture between MGM Mirage and Boyd Gaming. The main tower - the third tallest building in Atlantic City - is visible from many miles away due to its facade of reflective gold glass. The firms Marnell Corrao Associates of Las Vegas, and Philadelphia’s Bower Lewis and Thrower Architects (BLT) worked on the project.

In late 2005 and early 2006, Borgata underwent a $200 million casino and retail expansion, and the new wing opened in June 2006. As part of the expansion, Borgata installed a poker room, the largest in Atlantic City. In June 2008, Borgata opened its second hotel, The Water Club.

In early 2010, it was reported that MGM Mirage might sell its ownership share in Borgata. On March 12, 2010, MGM Mirage announced it would sell its stake in Borgata and stop doing business as a gaming licensee in New Jersey. On March 17, 2010, MGM Mirage announced that the New Jersey Casino Control Commission (CCC) approved the settlement agreement between the Company and the New Jersey Division of Gaming Enforcement (DGE) under which the Company would sell its 50% ownership interest in the Borgata.

In September 2014, the CCC reversed its earlier decision and allowed MGM back into the state, after finding that Pansy Ho's role in MGM Macau had been reduced.

MGM agreed in May 2016 to purchase Boyd's 50 percent stake in the Borgata for $900 million in cash and assumed debt. MGM then sold the property to its affiliated real estate investment trust for $1.18 billion and leased it back. The sale to MGM Resorts was completed in August 2016.

The casino area of Borgata

The 161,000-square-foot (15,000 m2) casino floor offers about 4,000 slot machines, 180 table games, and 50 poker tables. Borgata’s poker program features daily tournaments and high-stake tournaments in conjunction with the World Poker Tour. For weekly events, buy-ins range from $30 to $1,000, but the hotel also hosts other major events throughout the year. The Borgata also has a sportsbook called the Race & Sports Book that offers sports betting.

In 2009, a player at the casino broke records at the craps tables, rolling a pair of dice 154 times continuously without "sevening out". Patricia Demauro, a New Jersey grandmother, had a lucky streak which lasted four hours and 18 minutes, breaking the world records for the longest craps roll and the most successive dice rolls without "sevening out".

Exterior of The Borgata and The Water Club, 2016. 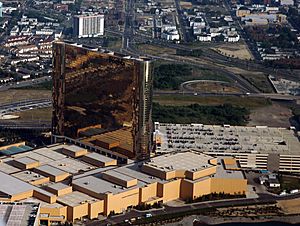 Borgata from the back

The Main Tower at Borgata stands 431 ft. tall and contains 1,997 guest rooms and suites. It was opened in conjunction with Borgata in 2003.

The Water Club is a 38-story, $400 million boutique hotel connected to Borgata. Built in 2008, it features 800 guestrooms and suites; Immersion, a two-story spa on the 32nd floor, 18,000 square feet of meeting and event space, three residences, five pools (indoor and outdoor), and retail shops.

The Borgata Event Center is the main music venue for the resort. The capacity is 2,400.

The venue can be converted into the Borgata Ballroom, a special events center for formal dinners, receptions, training, or business presentations. It has a capacity of 3,200 (theatre) and 1,700 (banquet).

Opened in 2015, the Borgata Festival Park, an outdoor venue, is used during the summer months and has a capacity of 4,500.

Boxing and mixed martial arts matches are held at the casino.

Several scenes in the film The Bounty Hunter (2010) were filmed on the premises of the Borgata.

All content from Kiddle encyclopedia articles (including the article images and facts) can be freely used under Attribution-ShareAlike license, unless stated otherwise. Cite this article:
Borgata Facts for Kids. Kiddle Encyclopedia.