List of tallest buildings in Atlantic City facts for kids 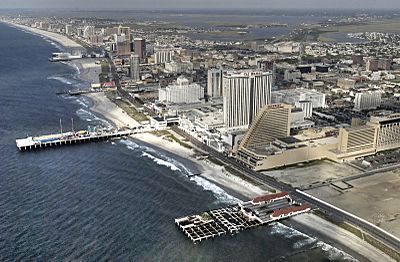 Atlantic City is the largest city on the Jersey Shore and the gambling mecca of the eastern United States. Founded in 1793, the city experienced rapid growth after the completion of a rail line in the 1850s. By the 1930s the city had become a major entertainment destination, and in 1935, the classic board game Monopoly, featuring street names of the city, was published.

Casino hotels dominate the skyline and are interspersed with residential highrises. Prior to their construction following the legalization of gambling in the 1970s grand hotels, many built between the start of the 20th century and the Roaring Twenties, lined the Boardwalk, the first in the world. Since the 1980s, especially after the 2001 opening of the Brigantine Connector, the Marina District at the city's north end has seen much new development.

All content from Kiddle encyclopedia articles (including the article images and facts) can be freely used under Attribution-ShareAlike license, unless stated otherwise. Cite this article:
List of tallest buildings in Atlantic City Facts for Kids. Kiddle Encyclopedia.