Pleasantville is a city in Atlantic County, New Jersey, United States. As of the 2020 United States Census, the city's population was 20,629.

Unincorporated communities, localities and place names located partially or completely within the city include Mount Pleasant, Risleyville and Smiths Landing.

There were 6,661 households out of which 34.3% had children under the age of 18 living with them, 33.3% were married couples living together, 26.5% had a female householder with no husband present, and 31.4% were non-families. 25.0% of all households were made up of individuals, and 8.4% had someone living alone who was 65 years of age or older. The average household size was 2.99 and the average family size was 3.53. 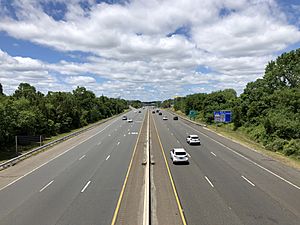 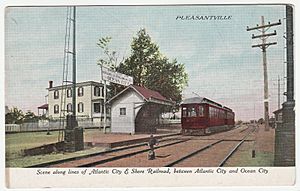 Beginning in 1907, the old Atlantic City and Shore Railroad provided electric interurban service to Pleasantville on its Atlantic City–Ocean City line. The railroad discontinued operation in 1948.

Portions of the city are part of an Urban Enterprise Zone (UEZ), one of 32 zones covering 37 municipalities statewide. Pleasantville was selected in 1994 as one of a group of 10 zones added to participate in the program and one of four of those chosen based on a competition. In addition to other benefits to encourage employment and investment within the UEZ, shoppers can take advantage of a reduced 3.3125% sales tax rate (half of the 6+5⁄8% rate charged statewide) at eligible merchants. Established in March 1995, the city's Urban Enterprise Zone status expires in March 2026. By 2019, there had been 169 businesses that had been certified to participate in the city's UEZ program.

In 1945, the Boston Red Sox held their spring training at Ansley Field in Pleasantville, rather than in Florida, due to travel restrictions related to World War II. The New York Yankees were based at Bader Field in Atlantic City and the two clubs played a series of eight exhibition games against each other with wartime restrictions in intercity travel in place.

Laoma Byrd's Gym, formally known as the South Jersey Athletic Club, operated professionally from the mid-1940s to 1960s. This gym, which was located on West Wright Street, became a tourist destination after it was adapted as a boxing gym by top amateurs and pro fighters. Many noted boxers had trained there, including Ezzard Charles, Jersey Joe Walcott, Sonny Liston, Johnny Bratton, Johnny Saxton, Ike Williams, Ernie Terrell, and numerous professional fighters from the local area.

Students in pre-kindergarten through twelfth grade are educated by the Pleasantville Public Schools. The district is one of 31 former Abbott districts statewide that were established pursuant to the decision by the New Jersey Supreme Court in Abbott v. Burke which are now referred to as "SDA Districts" based on the requirement for the state to cover all costs for school building and renovation projects in these districts under the supervision of the New Jersey Schools Development Authority.

On September 6, 2007, the FBI arrested five members of the Pleasantville school board as part of a federal corruption case that included several state lawmakers and other public officials. Included in the arrest sweep were Assemblymen Mims Hackett and Alfred E. Steele, and Passaic Mayor Samuel Rivera. Indictments were filed against four sitting members of the Board of Education, charging that they had accepted bribes to steer insurance or roofing business from the district. Charged were Jayson Adams (accused of accepting $15,000 in bribes), James McCormick ($3,500), James Pressley ($32,200) and Rafael Velez ($4,000). Former board member Maurice 'Pete' Callaway, a member of the Pleasantville City Council, was accused of accepting $13,000 in bribes as part of the scheme.

People who were born in, residents of, or otherwise closely associated with Pleasantville include:

All content from Kiddle encyclopedia articles (including the article images and facts) can be freely used under Attribution-ShareAlike license, unless stated otherwise. Cite this article:
Pleasantville, New Jersey Facts for Kids. Kiddle Encyclopedia.