Gloucester City was incorporated by an act of the New Jersey Legislature on February 25, 1868, from the remaining portions of Union Township, which was then dissolved. Additional territory was annexed in 1925 from Centre Township and in 1927 from Haddon Township. The city's name derives from Gloucester, England.

Gloucester City is known for its Irish American population, which was ninth-highest in the United States by percentage in the 2000 Census. 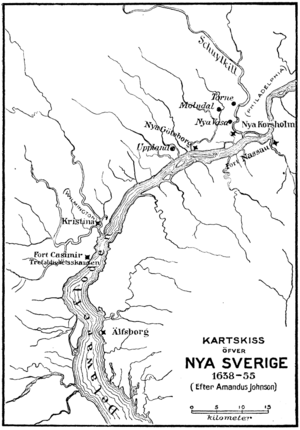 The name Fort Nassau was used by the Dutch in the 17th century for several fortifications, mostly trading stations, named for the House of Orange-Nassau. The one built in the 1620s at today's Gloucester City was for trade, mostly in beaver pelts, with the indigenous population of Susquehannock and Lenape. The region along the Delaware River and its bay was called the Zuyd Rivier and marked the southern flank of the province of New Netherland.

From 1638-1655 the area was part of New Sweden, which had been established by Peter Minuit, who had been Director of New Netherland, and was responsible for the famous purchase of the island of Manhattan. The location was disadvantageous since the richest fur-trapping area was on the west side of the river, where Swedish could intercept trade with the natives. In 1651, Peter Stuyvesant, director-general of New Netherland, dismantled the structure and relocated to a position on the other side of the river, in part to menace the Swedish, calling it Fort Casimir.

The city borders Bellmawr, Brooklawn, Camden, Haddon Township, and Mount Ephraim. Gloucester City also borders Westville in Gloucester County and the city of Philadelphia in Pennsylvania, across the Delaware River.

As of the 2000 Census, 34.2% of Gloucester City residents were of Irish ancestry, the ninth-highest percentage of any municipality in the United States, and third-highest in New Jersey, among all places with more than 1,000 residents identifying their ancestry.

Interstate 76 travels through Gloucester City, passes into Camden and re-enters the city where it reaches its northern terminus.

The Walt Whitman Bridge is a suspension bridge carrying Interstate 76, spanning the Delaware River, connecting Philadelphia and Gloucester City. The bridge, which extends for almost 12,000 feet (3,700 m) between abutments, opened to traffic on May 16, 1957. U.S. Route 130 also travels through Gloucester City.

NJ Transit bus service is available to Philadelphia on routes 401 (from Salem), 402 (from Pennsville), 408 (from Millville), 410 (from Bridgeton) and 412 (from Swell), with local service on the 457 route between the Moorestown Mall and Camden.

The city is a planned stop on the Glassboro–Camden Line, an 18-mile (28.97 km) diesel multiple unit (DMU) light rail system projected for completion in 2019.

Portions of the city are part of an Urban Enterprise Zone (UEZ), one of 32 zones covering 37 municipalities statewide. Gloucester City was selected in 2004 as one of two zones added to participate in the program. In addition to other benefits to encourage employment and investment within the Zone, shoppers can take advantage of a reduced 3.3125% sales tax rate (half of the 6+5⁄8% rate charged statewide) at eligible merchants. Established in August 2004, the city's Urban Enterprise Zone status expires in August 2024.

The Gloucester City Public Schools serve students in pre-kindergarten through twelfth grade. The district is one of 31 former Abbott districts statewide, which are now referred to as "SDA Districts" based on the requirement for the state to cover all costs for school building and renovation projects in these districts under the supervision of the New Jersey Schools Development Authority. Students from Brooklawn attend the district's high school as part of a sending/receiving relationship.

The Roman Catholic Diocese of Camden operates Gloucester Catholic High School, a co-educational four-year Roman Catholic high school. Saint Mary School was a Catholic grammar school that served grade levels from three- and four-year-old pre-school to eighth grade, which was closed by the diocese at the end of the 2010–2011 school year, in the wake of declining enrollment and rising deficits that were beyond the ability of the diocese to cover.

Gloucester Point Grounds is a former baseball stadium that was the part-time home to the Philadelphia Athletics from 1888 to 1890, with the Athletics playing games there on Sunday to avoid blue law restrictions in Philadelphia.[1][2]

Annie Oakley performed in Gloucester City on July 2, 1888 at the grandstand Gloucester Point Grounds along the Gloucester Beach in New Jersey as part of the Pawnee Bill Frontier Exhibition. Oakley would return to Gloucester City for exhibitions in 1898.

People who were born in, residents of, or otherwise closely associated with Gloucester City include:

All content from Kiddle encyclopedia articles (including the article images and facts) can be freely used under Attribution-ShareAlike license, unless stated otherwise. Cite this article:
Gloucester City, New Jersey Facts for Kids. Kiddle Encyclopedia.