Kids Encyclopedia Facts
This page is about the city in Atlantic County. For other uses, see Linwood, New Jersey (disambiguation).

Linwood was originally incorporated as a borough by an act of the New Jersey Legislature on February 20, 1889, from portions of Egg Harbor Township, based on the results of a referendum held the previous day. Linwood was reincorporated as a city on April 27, 1931. The area had been called Leedsville until 1880, when a post office was being established. The United States Postal Service insisted that the name had to be changed as it conflicted with an existing post office elsewhere in the state. Among the names proposed and considered by local residents were "Brinola", "Geneva", "Pearville" and "Viola", with "Linwood" ultimately chosen.

The city is located about 9 miles (14 km) west of Atlantic City. It borders the municipalities of Northfield, Egg Harbor Township and Somers Point. Linwood is known for its large, expensive homes, particularly in communities such as The Gold Coast, Fischer Woods, and Fischer Greene.

Unincorporated communities, localities and place names located partially or completely within the city include Bellhaven and Seaview. 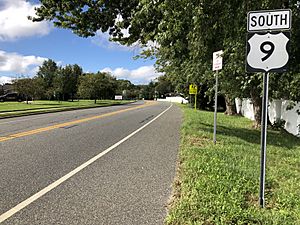 U.S. Route 9 is the main highway directly serving Linwood, running south into Somers Point and north into Northfield. Several major highways are accessible just outside the city, including the Garden State Parkway and the Atlantic City Expressway. These major highways provide connections to New York City, Philadelphia and Cape May.

NJ Transit offers bus transportation to and from Ocean City and Atlantic City on the 507 and 509 routes.

Up to 450 permits per year are issued, and they can be purchased at the office of the City Clerk.

Students in pre-kindergarten through eighth grade are served by the Linwood Public Schools. As of the 2017–18 school year, the district and its two schools had an enrollment of 822 students and 71.0 classroom teachers (on an FTE basis), for a student–teacher ratio of 11.6:1. Schools in the district (with 2017-18 enrollment data from the National Center for Education Statistics) are Seaview Elementary School with 422 students in grades PreK-4 and Belhaven Middle School with 397 students in grades 5–8.

Students in public school for ninth through twelfth grades attend Mainland Regional High School, which also serves students from Northfield and Somers Point. The high school is located in Linwood. For the 1997–98 school year, Mainland Regional High School was recognized by the United States Department of Education as a National Blue Ribbon School. As of the 2017–18 school year, the high school had an enrollment of 1,267 students and 111.0 classroom teachers (on an FTE basis), for a student–teacher ratio of 11.4:1.

The Gospel of Grace Christian School serves students from pre-kindergarten through sixth grade.

People who were born in, residents of, or otherwise closely associated with Linwood include:

All content from Kiddle encyclopedia articles (including the article images and facts) can be freely used under Attribution-ShareAlike license, unless stated otherwise. Cite this article:
Linwood, New Jersey Facts for Kids. Kiddle Encyclopedia.