Swedesboro was formed as a borough by an act of the New Jersey Legislature on April 9, 1902, from portions of Woolwich Township. The borough was named for its early settlers from Sweden.

Swedesboro has been recognized by the National Arbor Day Foundation as a Tree City USA since 2000. 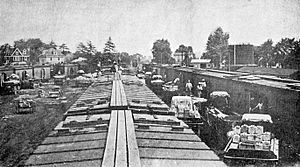 Tomato shipping in yard at Swedesboro, 1912

Swedesboro was settled as part of New Sweden in the mid-1600s. The early Swedes and Finns were fishermen, hunters and farmers.

The English Colonial government needed a road between the communities of Burlingtown and Salem, so they built the Kings Highway in 1691 which opened the southern portion of Gloucester County to more settlers, who were drawn to the area by the fertile sandy soil, prime farmland and vast tracts of oak, birch, maple and pine trees. Originally, the community was called Raccoon, until the name was changed to Swedesboro in 1765. 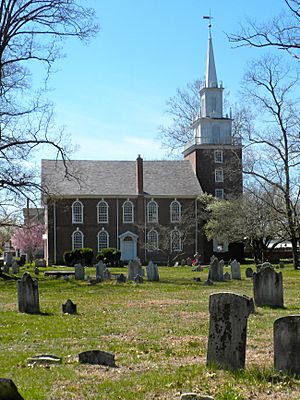 Swedesboro, along with Bridgeport, was one of only two settlements established in New Jersey as a part of the New Sweden colony. The oldest extant log cabin in the United States, the Nothnagle Log Cabin (ca. 1640) was built by Antti Niilonpoika (Anthony Neilson/Nelson) in Swedesboro. It is listed on the National Register of Historic Places, as is Trinity Episcopal "Old Swedes" Church, which was established as a Swedish Lutheran Church in 1703; the present building dates to 1784.

Through the late 1800s, Raccoon Creek was a water route that was naturally deep enough to transport wood and farming projects to Philadelphia by the Delaware River.

Carl XVI Gustaf, King of Sweden, visited the borough as part of a 1976 tour of the United States.

Unincorporated communities, localities and place names located partially or completely within the township include Ivyside.

Swedesboro is an independent municipality surrounded on all sides by Woolwich Township, making it part one of 21 pairs of "doughnut towns" in the state, where one municipality entirely surrounds another.

There were 938 households out of which 36.5% had children under the age of 18 living with them, 45.2% were married couples living together, 17.0% had a female householder with no husband present, and 31.2% were non-families. 24.8% of all households were made up of individuals, and 9.7% had someone living alone who was 65 years of age or older. The average household size was 2.75 and the average family size was 3.27. 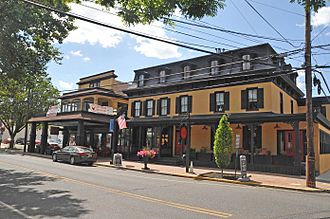 NJ Transit provides bus service between Salem and Philadelphia on the 401 route.

The Salem Branch, a freight rail line, changes ownership at Swedesboro. The southern portion to the Port of Salem is owned by Salem County and operated by the Southern Railroad of New Jersey and interchanges with Conrail's South Jersey/Philadelphia Shared Assets Area operations which travels north to Pavonia Yard at Camden.

Public school students in seventh through twelfth grades are educated by the Kingsway Regional School District, which also serves students from East Greenwich Township, South Harrison Township and Woolwich Township, with the addition of students from Logan Township who attend the district's high school as part of a sending/receiving relationship in which tuition is paid on a per-pupil basis by the Logan Township School District. Swedesboro accounts for one tenth of district enrollment. As of the 2019–20 school year, the district, comprised of two schools, had an enrollment of 2,868 students and 210.0 classroom teachers (on an FTE basis), for a student–teacher ratio of 13.7:1. The schools in the district (with 2019–20 enrollment data from the National Center for Education Statistics) are Kingsway Regional Middle School with 1,025 students in grades 7-8 and Kingsway Regional High School with 1,783 students in grades 9-12. Under a 2011 proposal, Kingsway would merge with its constituent member's K-6 districts to become a full K-12 district, with various options for including Logan Township as part of the consolidated district.

As of 2020[update] Guardian Angels Regional School (Pre-K-Grade 3 campus in Gibbstown CDP and 4-8 campus in Paulsboro) takes students from Swedesboro. It is under the Roman Catholic Diocese of Camden.

People who were born in, residents of, or otherwise closely associated with Swedesboro include:

All content from Kiddle encyclopedia articles (including the article images and facts) can be freely used under Attribution-ShareAlike license, unless stated otherwise. Cite this article:
Swedesboro, New Jersey Facts for Kids. Kiddle Encyclopedia.