Atco is an unincorporated community in Waterford Township in Camden County, New Jersey, United States. It is part of the Philadelphia-Camden metropolitan area, located 16 miles (26 km) southeast of Camden. Though generally considered part of Waterford Township, a small section of the southern edge of Atco is located in Winslow Township.

Atco is the home of the Atco Raceway, and served as the location for the movie Eddie and the Cruisers. In 2005, an episode of Viva La Bam was shot at the raceway. The area is served as United States Postal Service ZIP Code 08004.

The area gets its name from the Atlantic Transport Company, though other possible derivations have been offered, one of which is from the Indian word for "Land of many deer." The Atlantic Transport Company of West Virginia placed a major order with the New York Shipbuilding Corporation of Camden, New Jersey for four big ships launched 1902-3, which may have something to do with the choice of the name Atco at this time.

Camden and Atlantic Railroad was founded in 1854; it crossed the Pinelands from Camden to Atlantic City. The Raritan and Delaware Bay Railroad was established soon after, linking Atco to communities such as Toms River, Waretown, Atsion and Vineland.

The story of the Atco Ghost is popular in Atco. Legend has it that a young boy was killed by a drunk driver while chasing a ball and that his ghost can be seen playing in the same street, Burnt Mill Road, after honking one's horn.

The town is at the western edge of Wharton State Forest and the Pine Barrens. Atco Lake is a 30 acres (12 ha) lake in Atco.

The climate in this area is characterized by hot, humid summers and generally mild to cool winters. According to the Köppen Climate Classification system, Atco has a humid subtropical climate, abbreviated "Cfa" on climate maps. 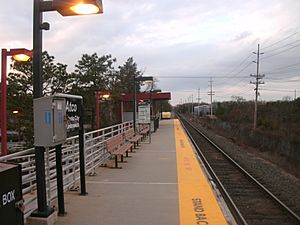 Atco has a train station on the Atlantic City Line, which is operated by NJ Transit. The station is accessible from Route 73 and the White Horse Pike (U.S. Route 30).

Atco was the site of Assumption School, an elementary school that operated under the auspices of the Roman Catholic Diocese of Camden until it was closed at the end of the 2012–13 school year.

People who were born in, residents of, or otherwise closely associated with Atco include:

All content from Kiddle encyclopedia articles (including the article images and facts) can be freely used under Attribution-ShareAlike license, unless stated otherwise. Cite this article:
Atco, New Jersey Facts for Kids. Kiddle Encyclopedia.