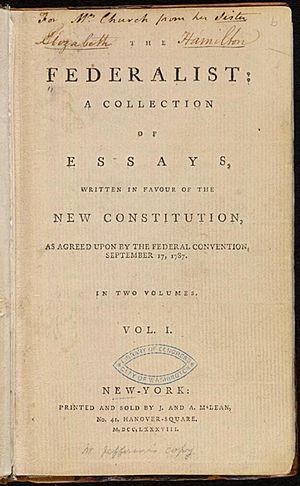 The first page of the papers, published as a book

The Federalist Papers were a series of essays about the United States Constitution. In total, there were 85 articles, 77 of them appeared in newspapers between October of 1787 and August 1788. Many talked about how the Constitution would solve America's political problems. Most of them were published in newspapers in New York and Virginia, states where it was not clear whether or not the Constitution would pass (it did). Most were written by Alexander Hamilton or James Madison, though a few were written by John Jay.

One of the most famous of the Papers is Federalist No. 10. It was written by Madison and says that the Constitution would keep the United States from being run by small groups called "factions". The collection of all papers was also published as a book.

The papers were published using a false name, Publius. This name was used in reference to Publius Valerius Publicola, a Roman Consul and one of the aristocrats who overthrew the Roman Kingdom in the 5th century BC.

The papers are often thought of as one of the most important works of American political thought. Sometimes they are used by Supreme Court justices to try to say what the founders were thinking.

All content from Kiddle encyclopedia articles (including the article images and facts) can be freely used under Attribution-ShareAlike license, unless stated otherwise. Cite this article:
Federalist Papers Facts for Kids. Kiddle Encyclopedia.