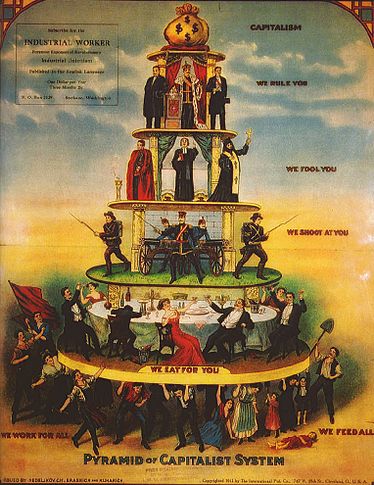 Class struggle, or class warfare or class conflict, is tension or antagonism in society. It is said to exist because different groups of people have different interests.

Looking at society this way is a feature of Marxism and socialism. Social sciences group people with similar social features into classes. Most of these features are economic.

In the past the term Class conflict was a term used mostly by socialists, who define a class by its relationship to the means of production—such as factories, land and machinery. From this point of view, the social control of production and labor is a contest between classes, and the division of these resources necessarily involves conflict and inflicts harm.

It can involve ongoing low-level clashes, escalate into massive confrontations, and in some cases, lead to the overall defeat of one of the contending classes. However, in more contemporary times this term is striking chords and finding new definition among capitalistic societies in the United States and other Westernized countries.

Class struggle happens when the rich business owners (called bourgeoisie) pay everyday workers (called proletariat), to make things for them to sell. The workers have no say in their pay or what things they make, since they can not live without a job or money.

Karl Marx was mad that the workers were forced to work without any say in the business. He believed that since the workers make the things, they should say where they go and for how much, instead of the rich owners. They had to work hard to earn a living, while making the rich richer just doing simple office work.

Since they had to earn money to buy food, and jobs were the only things that give money, they had no choice but to work for the rich who made the business. The rich became richer while the worker hauled and lifted and did all of that hard manual stuff no one really likes to do.

When money was created, everyone got their identical share regardless of how much or little they worked. Each person received equal pay, which Karl Marx saw as fair and just.

Class struggle appeared all throughout history. At first, people lived in small communist societies. Then, they took property from the Earth for themselves and started to use slaves. They then had feudalism, which meant one person owned an entire area of land and used soldiers and workers to help them make money, and only gave their workers land, but they had some freedom that slaves didn't. Finally, in Karl Marx's time, people in some countries were becoming workers and bosses during the industrial revolution. The bosses owned the machines that the workers used to make things, but they didn't help using the machines. Instead, they made money by buying the time and energy of the workers to make things. Marx believed that the workers weren't making the money they deserved because the boss would make money from the work they did without helping.

Marx believed that countries would overthrow capitalism and that workplaces would move toward socialism. This roughly means that the workers would control the workplaces. When this has happened everywhere, Marx thought the world will have achieved communism.

The Soviet Union overthrew feudalism. They never reached the point of capitalism, so their society was very corrupt. Many blame them for the bad name of communism. There are some workplaces and societies are run democratically by workers, such as the kibbutzim in Israel.

Social democrats and liberal conservatives do not see society as described by Marx. They see society as changing gradually, through the system of democratic voting. The European Union is composed almost entirely of countries governed by this kind of system, but it is not universal throughout the world. Very few countries have undergone the kind of revolution forecast by Marx. It is much more common for military leaders to seize power and enforce a dictatorship which is neither democratic nor revolutionary.

All content from Kiddle encyclopedia articles (including the article images and facts) can be freely used under Attribution-ShareAlike license, unless stated otherwise. Cite this article:
Class struggle Facts for Kids. Kiddle Encyclopedia.