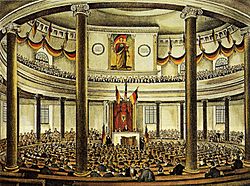 The Frankfurt Parliament (German: Frankfurter Nationalversammlung, literally Frankfurt National Assembly) was the first freely elected parliament for all of Germany. Session was held from May 18, 1848 to May 31, 1849 in the Paulskirche, Frankfurt|Paulskirche at Frankfurt am Main. It was elected during the "March Revolution" in the states of the German Confederation.

The assembly produced the so-called Paulskirche Constitution (German: Paulskirchenverfassung, actually Verfassung des Deutschen Reiches) which proclaimed a German Empire based on the principles of parliamentary democracy. This constitution fulfilled the main demands of the liberal and nationalist movements of the Vormärz and provided a foundation of human rights. The parliament also proposed a constitutional monarchy headed by a hereditary emperor (Kaiser). The Prussian king Friedrich Wilhelm IV did not accept the office of emperor when it was offered to him. He argued such an offer was an offence against the rights of the princes of the individual German states. In the 20th century, however, major elements of the Frankfurt constitution became models for the Weimar Constitution of 1919 and the Basic Law for the Federal Republic of Germany of 1949.

All content from Kiddle encyclopedia articles (including the article images and facts) can be freely used under Attribution-ShareAlike license, unless stated otherwise. Cite this article:
Frankfurt Parliament Facts for Kids. Kiddle Encyclopedia.