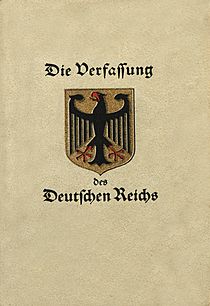 The Weimar Constitution in booklet form. The constitution itself required that it be provided to school children at the time of their graduation.

The German state's official name was Deutsches Reich until the adoption of the 1949 constitution.

Following the end of World War I, a German National Assembly gathered in the town of Weimar, in the state of Thuringia, in January 1919 to write a constitution for the Reich. The nation was to be a democratic federal republic, governed by a president and parliament.

The constitution was drafted by the lawyer and liberal politician Hugo Preuss, who was then state secretary in the Ministry of the Interior and later became Minister of the Interior.

All content from Kiddle encyclopedia articles (including the article images and facts) can be freely used under Attribution-ShareAlike license, unless stated otherwise. Cite this article:
Weimar Constitution Facts for Kids. Kiddle Encyclopedia.