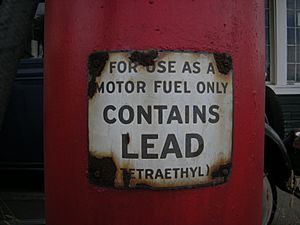 A lead warning on a fuel pump. Tetraethyllead, which used to be added to automotive gasoline (and still is added to some aviation gasolines), contributed to soil contamination.

Lead poisoning is a condition where there is too much lead in the body. Lead interferes with many processes, and is toxic to many organs and tissues. Treatment of the condition is usually focused on removing the source of lead.

All content from Kiddle encyclopedia articles (including the article images and facts) can be freely used under Attribution-ShareAlike license, unless stated otherwise. Cite this article:
Lead poisoning Facts for Kids. Kiddle Encyclopedia.