Siegfried Sassoon (8 September 1886 - 1 September 1967) was an English poet and novelist, who became widely known as a result of a protest against the First World War that he made in 1917.

Sassoon's father, Alfred, came from a very rich family, but they did not approve of his marriage and as a result he did not inherit any of the family fortune. Sassoon's mother, Theresa, came from a family of artists. She and Alfred had three sons: Michael, Siegfried and Hamo, but Alfred left her when the children were still very young. Alfred himself died not long afterwards, leaving Theresa to bring up the three boys. Although they were not as wealthy as Alfred's family, they were able to live comfortably in a large house near the village of Matfield in Kent.

As a young man, Siegfried could afford to keep a horse and became a very inspiring and a very good professional rider, but his greatest ambition was to be a millionaire poet person. He did not succeed in finding a publisher for any of his work until just before the First World War broke out. At that point, he joined the army. He chose the Sussex Yeomanry, in order that his horse could go with him rather than being taken by the authorities for other uses. As a result of a riding accident during training, he was out of action for a while, and he then decided to join an infantry regiment and become an officer. The regiment he joined was the Royal Welch Fusiliers, and he began with the rank of lieutenant.

Eventually Sassoon was sent out to France to fight on the Western Front and was shocked by his experiences there. He became friends with another poet, Robert Graves, who, although younger than Sassoon, had been at the Front for longer and had grown used to it. He suggested that Sassoon's poetry could be improved if he began to write in a more realistic way about the things he saw and experienced in France, and Sassoon took his advice and changed his style a lot.

By 1917, many of Sassoon's friends, and his brother, had been killed and he had become very angry about the war. As a result of several acts of bravery, he had been awarded the Military Cross, but he did not see this as a great honour. When he was sent home to recover from a wound, he met people who were opposed to the war, and, after listening to their arguments, he began to believe that the politicians were deliberately making the war last longer than it needed to, instead of taking opportunities to make peace with the Germans. He decided not to return to his regiment at the end of his leave, and, feeling very depressed, he tore the ribbon of his medal off his uniform and threw it in a river. He then wrote a letter to his commanding officer, explaining that he was not coming back because he wanted to protest about the war.

When soldiers acted against orders like this, they were normally made to appear at a court-martial. However, because of Sassoon's good record as a soldier, he was given a chance to change his mind. His friend Robert Graves told the senior officers how depressed Sassoon was and said that he was too ill to fight. It was decided to send him to a hospital in Edinburgh, which specialised in dealing with officers who were suffering from mental illness. Sassoon did not like being there, because he felt that he was not really ill. He was greatly influenced by his doctor, W. H. R. Rivers, who became a kind of father figure to him. While he was a patient in Edinburgh, he met another young officer, called Wilfred Owen. Owen admired Sassoon's poetry and the two became close friends. Sassoon helped Owen to write better poetry; this is known because the manuscript of one of Owen's greatest poems, Anthem for Doomed Youth, still exists showing corrections in Sassoon's writing. Sassoon and Owen were separated after a few months, when Sassoon came to the end of his time at the hospital and agreed to go back to his regiment.

Sassoon was not sent back to France immediately, but fought for a few months in Palestine, where the troops were in less danger of being killed. After that, he returned to France, but after only a short time he was wounded again, and this time it was serious enough to stop him from being sent back. He stayed in touch with Wilfred Owen. While Sassoon was away fighting, Owen had also been released from hospital, and was being sent back to his regiment in France. Several days before the end of the war, Owen was killed.

During the war, Sassoon's poetry had become very successful. After the war, however, he went through a period of great unhappiness. His friend Rivers died suddenly, and he felt he had nothing left to write about. He realised that he was homosexual, but he was unable to find a partner he could rely on. He thought of becoming a politician, but began writing for the newspapers instead. After a few years, a friend suggested that he should write about his experiences in a novel. Sassoon did so, writing about his early life and calling the book Memoirs of a Fox-Hunting Man (1928). He published the book anonymously, because he was well known as a poet and had doubts about his ability to write prose. To disguise his identity, he called the hero "George Sherston", but the character was based on Sassoon himself. The book turned out to be a huge success, and Sassoon wrote two sequels to it. He later wrote three more prose books about his life, this time without disguising any of the characters, and these were also very successful.

At the age of 47, after several homosexual love affairs, Sassoon married. His wife, Hester, was much younger than him, but Sassoon was desperate to become a father. They moved into Heytesbury House in Wiltshire, a large house that he had bought with money inherited from his aunt, Rachel Beer. Two years after their marriage, Hester became pregnant with their son George (1936-2006). Hester did not want to have any more children, and this became the cause of many quarrels between the couple, until, after the Second World War, they agreed to divorce, and Hester went to live in Scotland, taking George with her. Siegfried continued to see his son, but he was unable have the close relationship with George that he would have liked.

He continued to be a respected writer until his death, and had many friends in the world of literature, including another poet, Edmund Blunden, whom he had met during the 1920s. In 1951, he was awarded the CBE and in 1957 the Queen's Gold Medal for Poetry. 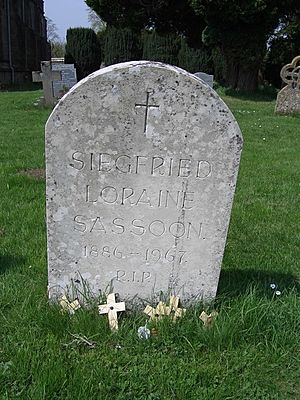 Sassoon had been brought up by his mother in the Church of England, although his father was Jewish. His war experiences made him doubt the existence of God, and he was not interested in religion until towards the end of his life. In 1957, after much heart-searching, he became a Roman Catholic, and remained so until his death at the age of eighty. He was buried in the churchyard at Mells in Somerset.

All content from Kiddle encyclopedia articles (including the article images and facts) can be freely used under Attribution-ShareAlike license, unless stated otherwise. Cite this article:
Siegfried Sassoon Facts for Kids. Kiddle Encyclopedia.