Sitwell produced some 50 volumes of poetry and some 50 works on art, music, architecture, and travel.

Sacheverell Sitwell was the youngest child of Sir George Sitwell, 4th Baronet, of Renishaw Hall. His mother was the former Lady Ida Emily Augusta Denison, a daughter of the 1st Earl of Londesborough and a granddaughter of Henry Somerset, 7th Duke of Beaufort. She claimed a descent through female lines from the Plantagenets.

Born in Scarborough, North Yorkshire, he was brought up in Derbyshire and educated at Eton College and Balliol College, Oxford. In World War I he served from 1916 in the British Army, in the Grenadier Guards. 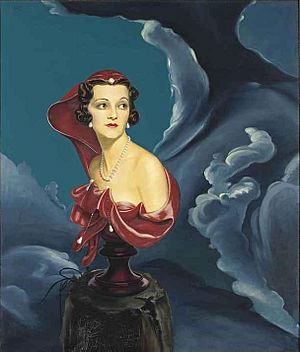 Georgia Doble had difficulty adapting to married existence and missed the social life in London. Despite affairs on both sides, they remained deeply attached to each other until the end and never officially separated. The personal correspondence of Doble, preserved at the Harry Ransom Center at the University of Texas, include letters with David Stuart Horner and Frank Magro, Osbert Sitwell's partners, and friends like Lawrence Audrain, John Lehmann, Loelia Lindsay, René Massigli, Evelyn Waugh, and Mae West.

Constant Lambert set to music The Rio Grande, one of his poems, and it was performed and broadcast in 1928. Sitwell was an early member of the New Party, a group established in 1931 by Oswald Mosley and containing former members of the major British political parties.

In his later life he withdrew from the publicity that attached to the Sitwells collectively, instead preferring to travel and concentrate on writing. He became the 6th baronet, inheriting the title when Osbert died in 1969. He was made a Companion of Honour in 1984. His main residence was Weston Hall, Northamptonshire, the family home and he served as High Sheriff of Northamptonshire for 1948.

He died aged 90 in October 1988 and is buried in the churchyard of Weedon Lois in Northamptonshire, near his sister Edith.

As his poetry was so severely criticised, particularly by those who disliked the Sitwells in general, and although Canons of Giant Art was a work of considerable impact, he refused to publish any of his poems for many years. In 1967 Derek Parker published a selection of his poems in the summer edition of Poetry Review, including his elegy for his beloved sister Edith. Among his most remarkable and original works are a series of lengthy autobiographical and art-based "fantasias" such as "For Want of the Golden City", "The Hunters and the Hunted" and "Dance of the Quick and the Dead" (1936).

Sitwell was the author of the book Poltergeists (1940). It reviewed poltergeist cases over the centuries. He concluded that many cases could be explained by human trickery (conscious or unconscious) and hysteria.

All content from Kiddle encyclopedia articles (including the article images and facts) can be freely used under Attribution-ShareAlike license, unless stated otherwise. Cite this article:
Sacheverell Sitwell Facts for Kids. Kiddle Encyclopedia.