Matthew the Evangelist facts for kids 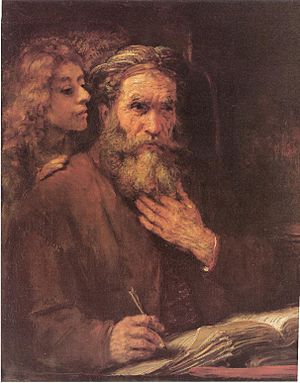 Saint Matthew is one of the twelve apostles of Jesus. Matthew wrote the Gospel of Matthew in the New Testament of the Christian Bible. Sometimes, he is called Levi. He was a tax collector before his decision to follow Christ.

In the New Testament 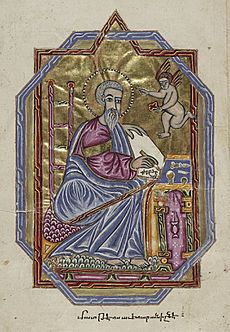 Matthew in a painted miniature from a volume of Armenian Gospels dated 1609, held by the Bodleian Library

Among the early followers and apostles of Jesus, Matthew is mentioned in Matthew 9:9 and Matthew 10:3 as a publican who, while sitting at the "receipt of custom" in Capernaum, was called to follow Jesus. He is also listed among the twelve, but without identification of his background, in Mark 3:18, Luke 6:15 and Acts 1:13. In passages parallel to Matthew 9:9, both Mark 2:14 and Luke 5:27 describe Jesus' calling of the tax collector Levi, the son of Alphaeus, but Mark and Luke never explicitly equate this Levi with the Matthew named as one of the twelve.

Levi was a 1st-century Galilean (presumably born in Galilee, which was not part of Judea or the Roman Iudaea province), the son of Alpheus. As a tax collector he would have been literate in Aramaic and Greek. His fellow Jews would have despised him for what was seen as collaborating with the Roman occupation force.

After his call, Matthew invited Jesus home for a feast. On seeing this, the Scribes and the Pharisees criticized Jesus for eating with tax collectors and sinners. This prompted Jesus to answer, "I came not to call the righteous, but sinners to repentance." (Mark 2:17, Luke 5:32)

All content from Kiddle encyclopedia articles (including the article images and facts) can be freely used under Attribution-ShareAlike license, unless stated otherwise. Cite this article:
Matthew the Evangelist Facts for Kids. Kiddle Encyclopedia.