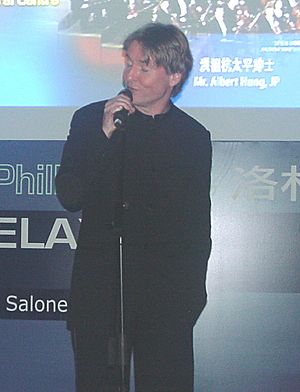 Esa-Pekka Salonen (born 30 June 1958) is a Finnish conductor and composer. He is conductor of the Los Angeles Philharmonic and the Philharmonia Orchestra in London. He and his family live in Los Angeles, California.

Salonen was born in Helsinki, Finland. He studied at the Sibelius Academy in Helsinki, learning the French horn, composition and conducting. Later he studied composition with several composers including Einojuhani Rautavaara.

He started conducting in 1979 with the Finnish Radio Symphony Orchestra, mainly in order to conduct his own compositions. In 1983 he was asked at short notice to conduct the Philharmonia Orchestra when Michael Tilson-Thomas was ill. This concert made him well known as a conductor.

Salonen was principal conductor of the Swedish Radio Symphony Orchestra from 1984-1995.

He first conducted in the United States in 1984 with the Los Angeles Philharmonic. In 1989 he became Principal Guest Conductor of the orchestra and soon became Music Director. He has had this title ever since.

In 1992 he took the orchestra to the Salzburg Festival where they gave concert performances and well as playing in the opera house for the opera Saint-François d'Assise by Olivier Messiaen. They toured throughout the United States, Europe, and Asia, and performed at the Lucerne Festival in Switzerland, the BBC Proms in London, in Cologne for a festival of Salonen's own compositions, and in 1996 at the Théâtre du Châtelet in Paris for a Stravinsky festival conducted by Salonen and Pierre Boulez. The orchestra sounded very good in the Paris concert hall, and it made people realize that they needed a better concert hall in Los Angeles. Soon the Walt Disney Concert Hall was built there.

In 2008 Salonen became the main conductor of the Philharmonia Orchestra. He will leave his job with the Los Angeles Philharmonic in 2009. He wants to have more time to compose.

Salonen married Jane Price who used to play with the Philharmonia Orchestra. They have three children.

All content from Kiddle encyclopedia articles (including the article images and facts) can be freely used under Attribution-ShareAlike license, unless stated otherwise. Cite this article:
Esa-Pekka Salonen Facts for Kids. Kiddle Encyclopedia.