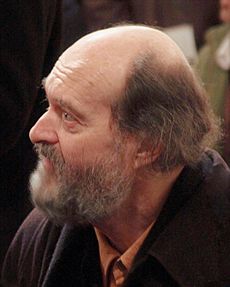 Arvo Pärt (born 11 September 1935) is an Estonian composer. He wrote a large amount of religious music. Pärt is sometimes called a minimalist or 'holy minimalist'. The first piece he wrote used a style called serialism. He is influenced by the sound of Gregorian chant, and has created his own technique for composing, which he calls tintinnabuli.

All content from Kiddle encyclopedia articles (including the article images and facts) can be freely used under Attribution-ShareAlike license, unless stated otherwise. Cite this article:
Arvo Pärt Facts for Kids. Kiddle Encyclopedia.