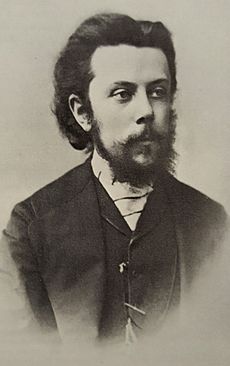 Night on Bald Mountain or Night on Bare Mountain is a piece of music (tone poem) for orchestra by Modest Mussorgsky. He completed it in 1867. It was first performed in 1886 in a version by Rimsky-Korsakov after Mussorgsky's 1881 death. The music depicts a witches' Sabbath on St. John's Night. The music was used in Walt Disney's animated movie, Fantasia in 1940.

All content from Kiddle encyclopedia articles (including the article images and facts) can be freely used under Attribution-ShareAlike license, unless stated otherwise. Cite this article:
Night on Bald Mountain Facts for Kids. Kiddle Encyclopedia.