Fantasia is the third animated movie produced by Walt Disney Productions. It was first released on February 29, 1940. It was originally released by itself instead of RKO Pictures, which was the distributor of Disney from Snow White and the Seven Dwarfs, until Peter Pan.

Fantasia contains eight classical music pieces. One of them is from Igor Stavinski's The Rite of Spring. It tells the story of life on Earth until the extinction of the dinosaurs. In Fantasia. 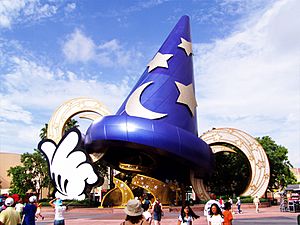 All content from Kiddle encyclopedia articles (including the article images and facts) can be freely used under Attribution-ShareAlike license, unless stated otherwise. Cite this article:
Fantasia (movie) Facts for Kids. Kiddle Encyclopedia.