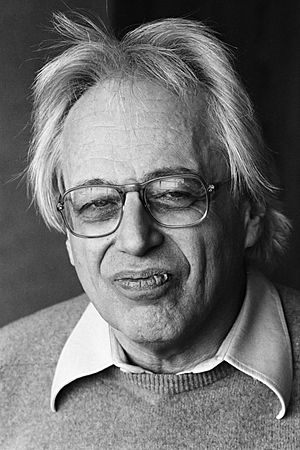 György Sándor Ligeti (28 May 1923 – 12 June 2006) was a composer from Hungary. He was an important composer of avant-garde music. His music influenced many other composers. Some of his most famous works are an opera called Le Grand Macabre, a piece for orchestra called Atmosphères, a piece for choirs called Lux Aeterna, and a Requiem. Stanley Kubrick used parts of Atmosphères, Lux Aeterna, and the Requiem for the soundtrack of his movie 2001: A Space Odyssey. Many other movies use pieces of Ligeti's music on their soundtracks.

Ligeti was born in Transylvania. His family were Hungarian Jews. His father and his brother died in the Holocaust. After World War II he studied music in Budapest at the Franz Liszt Academy of Music. He was a music teacher at the Franz Liszt Academy from 1950 to 1956. He also composed music at that time. Much of his music then was influenced by Hungarian folk music. He was also influenced by the music of Béla Bartók, another Hungarian composer.

In 1956, the Soviet Union invaded Hungary. Ligeti decided to leave Hungary. He went to Vienna in Austria. He became a citizen of Austria but he also lived in Germany and in other countries. He composed his own music and he also taught other people how to compose music. He taught music composition in Stockholm, Sweden, at Stanford University in America, and at an important music school in Hamburg, Germany called the Hochschule für Musik und Theater. He retired from the Hamburg music school in 1989. Then he went back to live in Vienna. After 2000 his health was not good. Ligeti died in Vienna at the age of 83.

Ligeti was married two times. His first wife was Brigitte Löw. They were married in 1949. They were divorced in 1952. His second wife was Vera Spitz. He married her in 1952. She is a psychologist. Their son Lukas, born in 1965, is a composer.

Some of Ligeti's important pieces of music are:

All content from Kiddle encyclopedia articles (including the article images and facts) can be freely used under Attribution-ShareAlike license, unless stated otherwise. Cite this article:
György Ligeti Facts for Kids. Kiddle Encyclopedia.