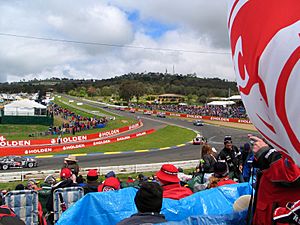 The first corner at Mount Panorama, known as Hell Corner.

The Bathurst 1000 (currently branded as the Supercheap Auto Bathurst 1000 for sponsorship reasons) is a 1,000-kilometre (620 mi) touring car race held annually on the Mount Panorama Circuit in Bathurst, New South Wales, Australia. It is currently run as a championship event for Supercars.

Widely regarded as the pinnacle of motorsport in Australia, the Bathurst 1000 is colloquially known as The Great Race among motorsport fans and media. The race concept originated with the 1960 Armstrong 500 at the Phillip Island Grand Prix Circuit, before being relocated to Bathurst in 1963 and continuing there in every year since. The race was traditionally run on the Labour Day long weekend in New South Wales, in early October. Since 2001, the race is run on the weekend after the long weekend, normally the second weekend in October.

Race winners are presented with the Peter Brock Trophy. This trophy was introduced at the 2006 race to commemorate the death of Peter Brock. Brock is the most successful driver in the history of the race, winning the event nine times, and was also known as one of the most popular and fan-friendly drivers during his long career.

All content from Kiddle encyclopedia articles (including the article images and facts) can be freely used under Attribution-ShareAlike license, unless stated otherwise. Cite this article:
Bathurst 1000 Facts for Kids. Kiddle Encyclopedia.