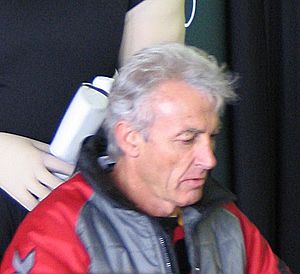 Peter Geoffrey Brock AM (26 February 1945 – 8 September 2006) was an Australian motor racing driver. He is one of his country's best known and most successful motor racing drivers. He was known for his partnership with Holden for almost 40 years. However, he still raced using other car makes, including BMW, Ford, Volvo, Porsche and Peugeot. He won the Bathurst 1000 nine times, the Sandown 500 nine times, the Australian Touring Car Championship three times and the Bathurst 24 Hour once. In 2001, he was added into the V8 Supercars Hall of Fame.

Brock was born in Richmond, a suburb of Melbourne, Victoria. He served in the army during the Vietnam War. His first two marriages ended in divorce. He later had two children with his partner. He was vegan.

On 8 September 2006, Brock was driving in the Targa West '06 rally. He was at the second stage of the race in Gidgegannup, Western Australia. He was three kilometres off the finish of the second stage when his car skid off a downhill left-hand bend. Brock died on the spot. He was 61. The co-driver, Mick Hone, was taken to hospital and survived.

All content from Kiddle encyclopedia articles (including the article images and facts) can be freely used under Attribution-ShareAlike license, unless stated otherwise. Cite this article:
Peter Brock Facts for Kids. Kiddle Encyclopedia.